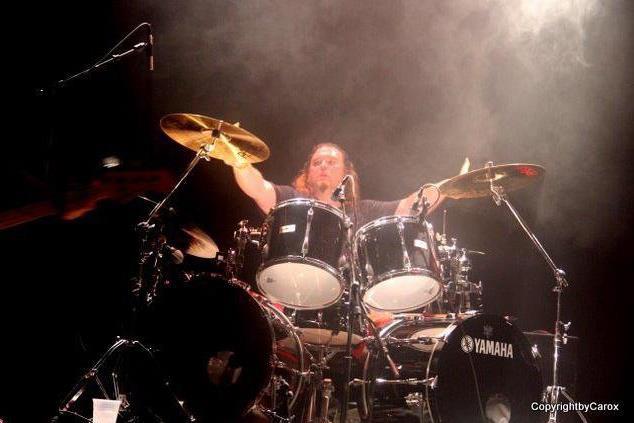 Hello, Modern Drummer readers, this is Frankie Anthony. First of all, it’s an honor to write for this blog. Modern Drummer has been my drum bible for years, so thank you, MD. I’m currently touring, writing, and rehearsing with my band mates in the Stick People. We’re signed to EFM/Bungalo/Universal Records and our first album, Madness, came out April 23, 2013. The first single, “Think About That,” is on iTunes and most other digital sites.

I currently play a Pearl Masters kit in Midnight Fade with two 22″ bass drums, 12″ and 13″ rack toms, 14″ and 16″ floor toms, and a variety of Pearl, Premier, ddrum, Peace, and Ludwig snares. My cymbals are Paiste 2002 series, and the hardware is DW.

I started playing at age five with the help of my father, who played in a variety of top-40 bands. He showed me the basics, so I could at least start playing along to Beatles and Elton John albums. By nine, my father would let me sit in every once in a while with his band, so I was getting to play with real musicians. I kept listening to a variety of albums, everything from Gene Krupa to Kiss, and tried to learn as much as I could from every drummer I listened to. In third grade, a teacher would come from the high school and offer music lessons to those kids who thought they might want to be in junior-high band, and of course I jumped at the chance. Anything that had to do with music was better than math, science, or history, plus I wanted to be like my idol at the time, Louie Bellson. By age fifteen, I recorded drums on a gospel album, and by seventeen was first chair in percussion under Dr. Alfred Reed for the state of Pennsylvania.

That’s the condensed version of how I started my drumming career. Since then, I’ve lived in New York and now Los Angeles and have done a lot of session work with all kinds of great engineers, musicians, and producers, along with being in many bands and indie and major-label projects.

All of this brings me to the Stick People and how we recorded the album. Recording usually starts out with the band doing pre-production work at a rehearsal space with a producer. Pre-production includes getting the songs to where everyone feels comfortable playing them and working them out to where the tempo, structure, and orchestration all come together. Work with a click in pre-production, so it will be second nature by the time you start to record. Time is money, so the fewer problems you have, the less time and money you’ll spend recording.

As a drummer, I like to get the tempo to where the singer’s phrasing is comfortable and makes the most sense for the song’s genre. Stephen, our lead singer, would send me demos of song ideas, and I would start experimenting with different beats and fills for each song. I like to record myself, so I can hear what’s working and what’s not. Sometimes things will change once you’re in the recording session. The producer might have an idea or you might fall upon something in the spur of the moment. Some of the best things happen by accident, and they did on this album.

For the first day at the studio, I like to get there early, meet the engineer, and talk about mic choice and how he/she sets them up to the kit. Over the years, I’ve learned every engineer does things a little differently when it comes to miking drums. My advice is to go to a studio and ask if you can hang out on a session and learn as much as you can about drum mics and mic placement from the engineer.

Next, I tune the drums to make sure they sound good, but this will change once mics are on them—trust me. I work with the engineer to tune or dampen if there are any rings or hums he/ she can’t get out with EQ. Invest in Moon Gels for dampening the heads, as they work miracles. Sometimes it takes a while to get good drum tones, but remember that you have to live with them once the album is recorded, so it’s worth it to work for good tones.

Now we’re finally ready to start tracking the drums. The engineer has my headphone mix ready, with Stephen singing and playing guitar so I know where I am in the song. Usually you have bass, rhythm guitar, and vocals to do the drum tracks to, even though the rest are what they call “scratch tracks.” You never know what you might keep for the final performance. We usually run a couple of practice passes through the song to make sure I can hear and feel the click and to make sure all the levels are good. I’ve learned to tell the engineer to keep the record button on just in case a practice pass turns out to be stellar, but that hasn’t happened yet. Usually after one or two takes, if you’ve done your homework in pre-production, the drum track is finished.

Steve and I did a bunch of songs, and for this particular album we did them in chunks of four or five at a time instead of doing all the drum tracks at once.

I’d like to leave you with a few tips that have helped me over the years. Find a good teacher. Even if you’re a pro, you can always learn something—Buddy Rich told me that. Stretch and warm up before you play. Learn to play with a click. Anything you play with your hands (rudiments), play with your feet, especially if you’re a double-bass drummer. At every practice, learn something new. Don’t keep practicing stuff you’re already great at, and try to play with other good musicians. If there is only one book you ever buy to help your drumming, get Gary Chester’s The New Breed. Trust me, it will make you a better musician. Practice does make perfect—or close to it!

For more on Frankie Anthony and the Stick People, visit www.facebook.com/thestickpeople.