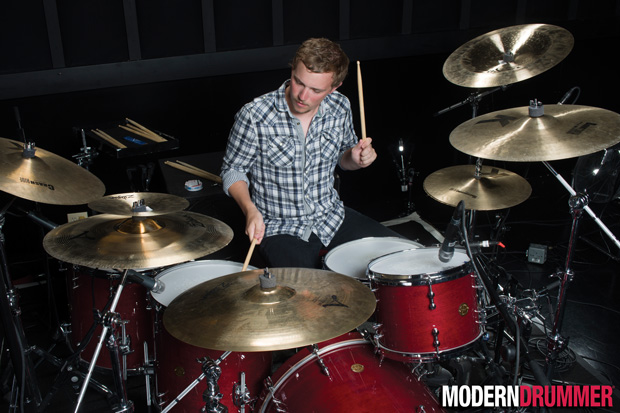 In this exclusive MD Online interview, the drummer discusses his double life as arena rock god and basement-dwelling indie plebian.

MD: You had already started the band Bearcubbin’ before landing the Smashing Pumpkins gig. So which do you see as being your side project?

Mike: [laughs] Well, Bearcubbin’ obviously isn’t my job band, so I guess it can be called a side project, even though it was there first. I have a great deal of love for Bearcubbin’, and it’s a very different perspective from being part of Smashing Pumpkins. It’s a weird thing to go from playing arenas to literally playing in somebody’s basement, but it’s super-fun, and I think I’m really lucky to get to experience both sides of the coin.

MD: How long was Bearcubbin’ a band before you got called up to the big leagues?

Mike: About two months after I started playing with Bearcubbin’ I got hired for Smashing Pumpkins.

MD: How did they react when you told them?

Mike: At first they were like, “No, Mike—no you didn’t!” But then the reality of it set in, and it was, “Holy crap…well, I guess you’re gonna be gone for seven or eight months of the year.” We learned to adjust, though, and when I come we just go crazy writing and playing a bunch of shows, which keeps the project moving.

MD: After the reality set in for you personally, what went through your head in terms of the gravity of stepping into an iconic band?

Mike: It’s hard to describe, because the fact that the band has this iconic status, there’s a double-edged-sword effect. I was and still am excited to be part of this process, and it’s really cool [being able to play] in front of a mentally hungry fan base—people that want to hear artistic music. And then there’s the reality that you’re stepping in behind someone like Jimmy Chamberlin, who has iconic status as a drummer and is so highly regarded in the drumming community. I was shaking in my boots at first, but it was also something I saw as such a unique challenge. I think having to play against the legacy of the band and Jimmy as a drummer was something that almost worked to my benefit.

MD: You have a China set up to the left of your hi-hat, which you use for accenting, something Jimmy also used in his setup. Was that something you always did, or was it something you started doing as a result of learning his parts?

Mike: I always kept my China on my right side, up to a few years ago, when I  started playing with this really weird local band. The music required me to learn all this left-hand lead over polyrhythms, so I switched it to the left side. I kept it there on my kit for Smashing Pumpkins because Jimmy basically did the same thing. There are certain songs of his where you would get tangled up trying to reach to the right for the China. It also gives me the ability to have that open-handed power accent on a whim, and when we do any super-rhythmic hits it just sounds big when you’re kicking and accenting on the China at the same time.

For more with Mike Byrne, check out the February 2013 issue of Modern Drummer magazine, available now on iTunes/iOS and Android/Amazon.