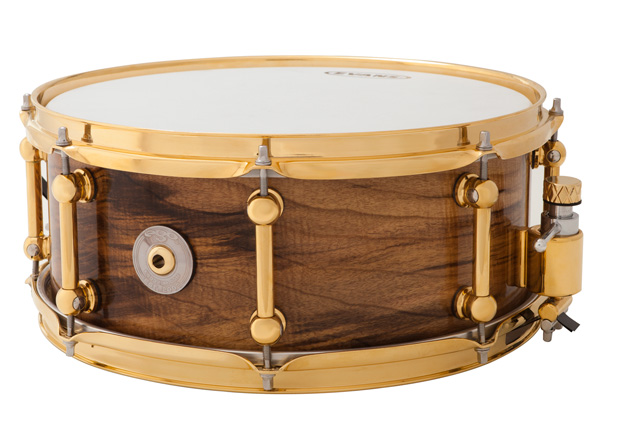 The initial endeavors of the Oregon-based Ego Drum Supply were aimed at using aerospace alloys and digital technology to make lugs, but the company has since expanded into other areas of drum production, including single-ply steam-bent snare shells. This looker is outfitted with Ego’s own twenty-four-karat gold-plated hardware, which includes eight rounded tube lugs, a custom throw-off and butt plate, and 2.3 mm triple-flange hoops. The beautiful myrtle shell is hand-rubbed with French polish.

The shell began as a solid piece of wood measuring roughly 50″x7″x.5″. After being bent, it was shaped by a 1918 engine lathe to a core shell thickness of approximately .25″. Reinforcement rings were added to help keep the shell in round. The only non-Ego parts are the Evans drumheads (coated G1 batter, Hazy 200 resonant) and PureSound snare wires.

I ran the drum through low, medium, and high tunings, starting with the batter at medium tension. The warmth of the solid shell made for a very refined sound that integrated nicely with my maple kit. The process of steam bending puts a certain amount of tension into the wood, resulting in a naturally higher pitch, which was offset by the earthy tonality of the myrtle. To draw a comparison with a steam-bent cocobolo snare I own, both share traits of having a lot of presence and a rich tone, but the Ego had a subtle smoky character as well; even though this is a brand-new drum, it felt and sounded as though I’d been playing it for years.

In the high and medium tuning range, without muffling, the Ego shell’s overtones were housed in the midrange frequencies from 400 to 900 Hz, with more pronounced overtones appearing toward the edges of the spectrum. Minimal muffling helped shave off the edginess for a more focused sound. The snare response was clear and articulate but wouldn’t be considered bright or snappy. Low tuning maintained a fat attack, but the tone started to warble a bit if I didn’t use any muffling.

Overall, this Ego snare had a wide tuning range that offered a diverse enough selection of tones to cover many genres of music. The gold-plated hardware is an optional upgrade. As is, this drum has a steep $2,600 price tag, but it comes with an impressive Rock Hard road case that will surely help protect your investment.