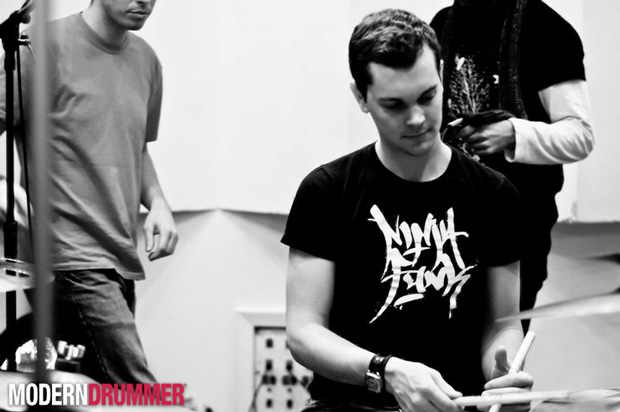 Greetings from Toronto! My name is Mack Longpre. I’m a twenty-four-year-old drummer and baseball enthusiast who holds Tim Horton’s coffee and baked goods close to my heart. I’d love to take this opportunity to share a bit about myself and to talk about the people who have helped, taught, and influenced me.

As with most musicians, my parents were instrumental in my growth from the beginning. Violin lessons and Vivaldi gave way to Queen, Led Zeppelin, the Beatles, and a practice pad and sticks. This in turn gave way to a snare drum and drum lessons, and finally a beautiful set of black CB drums. My folks may be the only parents to endure the violin scratching of a five-year-old, and five years later decide they were alright with starting over with the reckless and rhythm-less pounding of a ten-year-old drummer. To their credit, very little alcohol was involved, and I am forever thankful for their support and love.

Things changed when Rush and Dave Matthews Band entered the picture, and then John Coltrane’s A Love Supreme. At fourteen, I was introduced, through my ever-giving high school music teacher, Myles Crawford, to Jim Blackley. You may not be familiar with this name, but Jim is the guru of all things jazz-drum-related in Canada. He has published numerous tomes on jazz drumming. His pedagogy and writing style are dripping with his love of the music, his passion for education, and his friendly demeanor. Meeting him, and subsequently studying with him for five years, was an experience not easily conveyed in a blog entry. Suffice it to say, I learned as much about being a good and decent person as I ever did about playing quarter notes on the ride cymbal.

I then went to the University of Toronto’s Jazz Program, and met some of my closest friends and musical allies. Through my studies with Terry Clarke, Bob McLaren, John Rudolph, and bassist Jim Vivian, as well as all my theory, ear-training, and ensemble experience, I became a confident and relatively busy sideman, writer, and arranger. I’ve enjoyed playing many different styles throughout my career, and I’m continually amazed and inspired by drummers like Brian Blade, Antonio Sanchez, Chris Dave, and Jojo Mayer, to name only a few.

Much of my time is spent playing in Ninja Funk Orchestra, the Shafton Thomas Group, and with singer-songwriter Chloe Charles, among others, as well as writing and performing with my own large modern-jazz ensemble. I’d like to thank Seppo Salminen at TRS Custom Drums for building a couple of beautiful sets of drums for me, as well as Dave Rundle at Headhunter drumsticks. I

Thanks for reading, and all the best!

For more on Mack Longpre, go to mackenzielongpre.com. To see Mack with Chloe, go here.