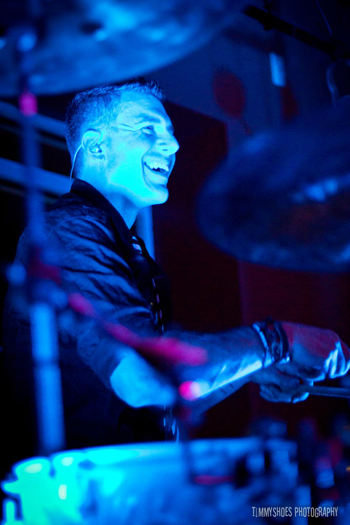 Hi, MD readers! I still have my very first issue of Modern Drummer—February 1989. Bill Bruford is on the cover. The first song I ever learned to play as a very young kid is in that issue, “Pour Some Sugar On Me” by Def Leppard, so it is very cool to be able to do my first post on the magazine’s website. As a long-time subscriber, it is a dream come true.

I have had many firsts in the past year as the drummer for Alabaster. After touring in early 2012, my band started on our new release, The Villain In Me. We went to the legendary London Bridge Studios in Seattle to record the entire album. This was another dream come true. Being able to set up my drums and record in the same place where so many of my favorite CDs were made—Pearl Jam’s Ten, Alice in Chains’ Face Lift, Soundgarden’s Louder Than Love, Anberlin’s Cities, and parts of Death Cab for Cutie’s Codes and Keys—was like being in my very own holy place. It is moments like this when I realize that what I get to do as a drummer is awesome.

After tracking was done on the new EP, and while the band was patiently waiting for the songs to get mixed and mastered, we had the opportunity to play some of my favorite shows thus far, like the Warped Tour in Seattle, as well as sold-out shows with Switchfoot and Yellowcard. These shows were special because we were relatively unknown to the audiences, but by the end they were singing our songs with us.

We recently made the journey down to Austin, Texas for SXSW. I was blown away by the sheer amount of people there to see music. It was like Mardi Gras for musicians. I have a little piece of advice for drummers who have multiple shows booked for SXSW—pack light. On our first day, we had three showcases booked and had to walk with all our gear to each one. There aren’t many hills in Austin, but we managed to run into every one of them. I have never been so exhausted in my life. During our downtime, it was great to just go cruise Sixth Street and pop in and see new bands we’d never heard, like Set it Off, the Hollows, and Hrvrd. It was nice to see bigger bands, like the Yeah Yeah Yeahs, Macklemore, and Ryan Lewis, playing in tiny venues. This is a trip I highly recommend, not just as a band, but also as a fan of music.

Alabaster’s EP, The Villain In Me, is ready to go with our first single, “Scream it Out.” It will correspond with our video release at PureVolume.com. We are working on tour dates for the summer as I write this. The future is looking exciting!

I’d like to send a special thanks to Big Picture Media, Saluda cymbals, and Indimay custom drums for supporting us in all our endeavors thus far.

Thanks for reading, and I hope to see you on the road!

For more about the band, visit www.AlabasterBand.com.