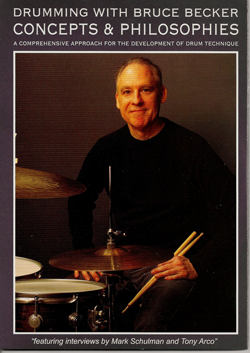 Greetings, fellow drummers. Bruce Becker here. I am currently residing in Los Angeles and have been recording and gigging with my brother David for thirty years. I am very involved in teaching as well.

I spent a long period of time studying with Freddie Gruber, from 1977 until 1984, but that was not the end. I became as close as one could become with him. I became Freddie’s go-to guy, house sitter, and airport runner. When I moved to Belgium in 1992, Freddie made several trips to hang with me, and I am the only guy I know of that actually did five clinics with him. I would need a never-ending blog to really give perspective to all the hanging I did with FG, and there are too many stories to tell.

Anyway, I just wanted to take the time to announce the release (exclusively through brucebecker.com) of my DVD Concepts and Philosophies—A Comprehensive Approach for the Development of Drum Technique. This video is a two-disc set and took two years to put together. It highlights many of the details of Freddie Gruber’s approach through my many years of not only studying, but also watching him teach countless students such as Steve Smith, Dave Weckl, Steve Houghton, Richie Garcia, and many more. I truly hope you will check it out. If you are interested please contact me directly, via my website, and I will give you the details on how to purchase it.

Through the years, I have been very fortunate to have guys like Daniel Glass, Mark Schulman, David Garibaldi, and Tony Arco all come to study with me.

In other news, I have just recorded my tenth CD, Distance Traveled, along with my brother David and our trio, the David Becker Tribune, and it will be released later this year. I have also been involved in a project that is a tribute to the late guitarist Attila Zoller. His playing and personality were far reaching, as he connected with many musicians throughout his lifetime. I was asked to record with some friends of Attila’s, such as Ron Carter, Mike Stern, John Abercrombie, Peter Bernstein, just to name a few. Pat Metheny and Jim Hall also make an appearance on the CD. Look for that later this year.

Keep following your passion. Thanks and peace!