With 30 Seconds to Mars’ brand-new single, “Up in the Air,” whetting fans’ appetites for the band’s upcoming fourth album, Love, Lust, Faith & Dreams, we thought it would be a good time to revisit drummer Shannon Leto’s Gimme 10! article from the May 2010 issue of Modern Drummer magazine. 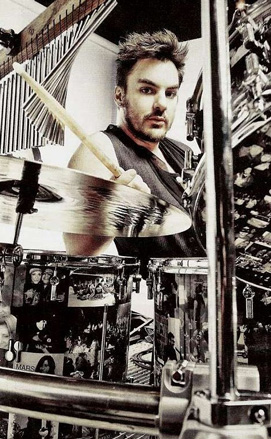 1. Be inspired by the experiences you’ve had in life—the good, the bad, and the ugly.

I never want to be trapped into doing the same thing. So I try to remain open-minded. If I’m not open to new ideas, then I’m limiting my creative process.

2. Tune the drums the way you want to hear them in the track.

I use different-size toms and different thicknesses of shells for different songs. I also play in various parts of the building to capture different sounds. On our new album, This Is War, the song “Night of the Hunter” took me ten days to get the tom sounds, and having the time allows me more freedom to express myself.

I meditate by taking deep breaths in and then slowly letting them out. This helps me be more in the moment while I’m creating.

Even if those ideas don’t necessarily work, they may trigger another idea in you that does work.

After all, we’re making art for a living!

I try to get eight hours every day. With the time-zone changes of the world, you can get a little bit craaazy. Also, if I don’t get sleep I’m more susceptible to getting sick, which is lame when you’re trying to perform. I’ve learned that eating well helps too.

7. Venture out and explore while in different parts of the world.

I like to do activities such as hang gliding, crocodile wrestling—you know, the normal stuff.

8. Warm up before the show.

An hour before I perform I take time to meditate, stretch, and warm up so I don’t cramp up. Twenty minutes before I go on, I blast some heavy music to get my blood pumping.

While I’m playing I remind myself to breathe, because I forget sometimes. I take deep breaths in and deep breaths out. It sounds corny, but it works when you’re playing hard for a while.

After playing a show I disappear in a room for a bit to savor the experience I just shared with everyone.