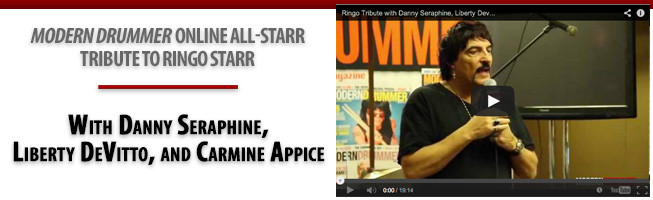 Rockaholics camp sessions will feature road stories, musical performances by individual artists, Q&As, and more, and each day will end with nightly jam sessions featuring the camp’s celebrity counselors. Additional details about the daily schedule will be announced in the coming weeks.

“I’ve been thinking about doing a drum camp forever,” says Carmine. “Then while I was at NAMM, it hit me. ‘Hey, this can be way cooler than that. Make it a fan camp for all rock/metal heads.’ So I cherry-picked some amazing stars to join me, and Full Moon Resort offered me a fantastic price package. What better way to reward the fans who have been so loyal for so long than to give them a once-in-a-lifetime opportunity to spend around-the-clock face time with me and my friends? We’ll all be hanging out and having a great time.”

While the Rockaholics Metal Fan Camp will showcase Carmine’s own flair for rock ‘n’ roll storytelling, he’s equally enthusiastic about the lineup of camp counselors that he recruited. “As I ran into my friends at NAMM, I asked different people in the rock and metal arena if they would be interested,” Carmine says. “The guys who committed rock! They are some of the best in the biz. They are cool, personable rock stars that have seen it all. It’s going to be a great time!”

Carmine Appice’s Rockaholics Metal Fan Camp offers a variety of pricing options based on the variety of available accommodations. Packages are on sale now here, and start at $795, including lodging and access to all gourmet meals, performances, and camp activities.