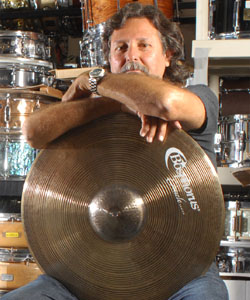 Hi MD readers! This is my first ever blog, and I wanted to tell you how I got to work on the upcoming Superman soundtrack. The whole thing started when I got a call from film scorer Hans Zimmer’s assistant. She wanted me to see a YouTube video of marching band guys all playing the same rig. Each one of them was standing behind two toms, a parade snare, and two small crash cymbals. There were ten of them, and they were all playing the exact same parts. The assistant then asked if I could think up some ideas to present to Hans on how to make it “bigger-sounding.” (I love it when people ask me that!)

After studying the video, I had a concept that I thought was worth showing to Hans. I ran it by the assistant, and she told me to talk it over with Hans’ drummer, Satnam Ramgota. He liked it enough to run it by Hans. Then I got a call that Hans loved it, and I should start putting together ten kits while he booked the drummers to play them. He booked Jim Keltner, Matt Chamberlin, Vinnie Colaiuta, Sheila E, Bernie Dresel, Curt Bisquera, Toss Panos, Trevor Lawrence Jr, and John JR Robinson—along with Satnam. Not too shabby!

The day of the session, I set up all these drums at the Warner Brothers Eastwood stage (yes, as in Clint). I still didn’t know what the project was, as it was being kept a secret, but I knew it was big. The tracking room was big, and it sounded beautiful. The engineer and I spent about four hours getting sounds before the drummers got there to record. They arrived, got their coffee, and then everyone was called together to go over the game plan. That’s when I finally found out what this was for—the soundtrack for the new Superman film!

As they began to record, I kept an eye on all of them to make sure everything was working and each drum stayed tuned, and basically, that there were no problems. It all was pretty smooth on the soft passages, but as the conductor signaled for them to build from ultra-soft to really powerful, drumheads began to dent, bass drums began to get knocked off their stands… You get the idea. I was running around, changing heads, swapping snares, and taping drums to their stands. It’s one thing to keep one or two guys together at a time, it’s another to keep ten players tuned and ready when they’re asked to play really hard. I’ve never been pulled in so many directions at once before, but it was very cool watching it go down and I can’t wait for everyone to hear it!

For more on Ross and Drum Doctors, visit www.drumdoctors.com.