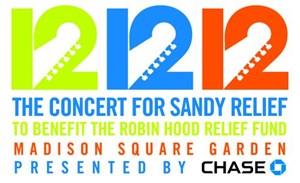 The producers of “12-12-12” have announced that the concert at Madison Square Garden on December 12, 2012, at 7:30 PM (ET), to aid the victims of Hurricane Sandy, has secured distribution to over one billion people. The concert will be able to be seen on 34 US networks and television feeds worldwide, radio and online streaming. “12-12-12”, which is presented by Chase, will be distributed across networks and feeds in North and South America, Europe, Africa, Asia and Australia. Tickets to “12-12-12” are on sale now.

Event producers James Dolan, John Sykes, and Harvey Weinstein issued the following joint statement: “The fact that so many major media companies are joining forces to distribute and stream this important event to homes worldwide will enable us to create a tremendous and unprecedented fundraising effort on a global scale to benefit the victims of this devastating storm.”

With every major U.S. media company airing the benefit on at least oneof their networks, 34 channels will “take over” TV for the night. Clear Channel Media and Entertainment will broadcast the concert live on its radio stations across the country, and will also video stream live on iHeartRadio, Clear Channel’s digital radio service, and across the websites and Facebook pages of its 850 stations. In addition, the concert will also stream live across several major online video providers, as well as being streamed and promoted by several digital media partners. The concert will also air in conjunction with the NBA’s television and online streaming broadcasts in China and simulcast live on Clear Channel Outdoor digital billboards in Times Square, New York City and locations in London and Paris.

The concert is being produced by James Dolan, executive chairman of The Madison Square Garden Company; John Sykes, president of Clear Channel Entertainment Enterprises; and Harvey Weinstein, co-founder and chairman of The Weinstein Company.

Thanks to the generosity of concert organizers, sponsors, and Robin Hood’s board of directors, every single penny from ticket purchases and donations will go to serve the victims of Hurricane Sandy through the Robin Hood Relief Fund.The Robin Hood Relief Fund provides money, material and know-how to local organizations that are serving families and individuals in the regions hardest hit by the storm.

Tickets for “12-12-12” are on sale now through Ticketmaster phone outlets and www.ticketmaster.com, www.thegarden.com and www.radiocity.com. Tickets are available at a variety of price levels.