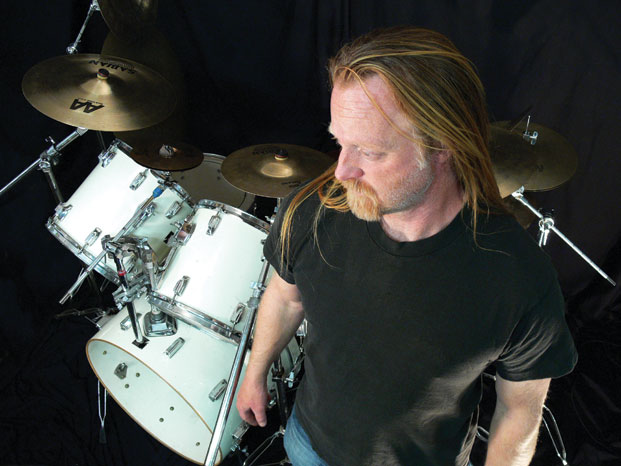 During our interview for the December 2012 issue of Modern Drummer, Steve Shelton frequently voiced his desire to pull the rug out from under the listener. Since 1987, when he joined the Raleigh, North Carolina, doom-metal band Confessor, Shelton has been on an unholy crusade of beat flipping and all manner of rhythmic dislocation; his idiosyncratic double bass approach, hand-muted cymbal work, and obsession with counterintuitive accents add up to one of the most stimulating aesthetics in all of metal. Below are five examples of Shelton’s inimitable brilliance, featuring selections from Confessor as well as his instrumental project, Loincloth.

The concise lead track off Iron Balls of Steel, Loincloth’s recent debut LP, plays like a Steve Shelton manifesto. The drummer navigates the song’s merciless rhythmic obstacle course with stunning flair. He’s not just hitting the accents, he’s assuring that the groove remains paramount. Notice how he charges into a fluid roll at 0:28 and uses hand muting to summon a strange cymbal sizzle during the stop-time passage around 0:43.

“The Stain,” one of the strongest tracks from the first Confessor full-length, Condemned, shows off the way Shelton explores a complex riff like a child on a jungle gym, locating the hidden accents and varying his emphasis to unlock multiple time feels. During the intro, the first statement of the song’s core theme, he employs a backbeat feel, but when the riff returns, Shelton opts for a daredevil syncopation. The beat flip at 1:50 opens up a new perspective on the same rhythmic grid. The breakdown at 1:32 is another example of how Shelton can locate the hidden swing in even the most complex passages.

On this aptly titled Iron Balls track, Shelton demonstrates that daunting complexity can coexist with infectious funkiness. On the intro riff, Shelton’s cymbals explode like Snap-n-Pops; he uses hi-hat, splash, and ice bell in conjunction to create a richly textured staccato dance beat. At 1:50, Shelton’s bass drums lock in with Cary Rowells’s bass, firing like irregular pistons and setting up the off-kilter rhythmic loop that ends the song.

This deep cut from Confessor’s comeback album, Unraveled, offers the chance to hear Shelton in a more traditional doom-metal framework. The drummer punctuates the strangely majestic intro with a repeated snare-roll crescendo, and then shifts to a fluid beat marked by tasteful 16th-note triplets—a figure that becomes a motif throughout the song. Other highlights here include a tasty hi-hat roll at 1:08, the lopsided groove that starts at 1:28, and the slithery hi-hat and bass drum flourish at 3:15.

The unaccompanied drum intro on the title track of Condemned is arguably the definitive Steve Shelton statement, a mad-scientist math problem translated into a surprisingly airy-feeling rhythm. As you’ll read in the print article, Shelton mapped out the passage meticulously, arriving at a beat with an odd split personality: spastic in the low end, spacious up top. The rest of the track continues the tech-metal master class. Listen for the monster fill at 0:29 and for the way Shelton constantly varies his accents during the 5/8 verses, creating a diabolically unstable foundation. When Steve talks about pulling the rug out from under the listener, this is what he means.

Check out Shelton’s solo drum-cam demonstrations of “Hibernation”  and “Condemned.”