Hello MD readers! My name is Jason Dana, and I’ve been playing the tubs since I was a young child. I’m involved in a project called Bend Sinister. Our latest LP is titled Small Fame. The band is a modern take on classic rock in the vein of Queen, Deep Purple, Supertramp, and Steely Dan. The album was recorded in Vancouver at Mushroom Studios.

I had recorded at Mushroom several times in the past, but for this record I noticed the gold record trophies displayed on the wall. Some really great recordings have taken place there, including notable albums from Heart, Loverboy, and the Supremes. But what really grabbed me was the encased Led Zeppelin II album. It turns out that things like tambourine and harmonica were tracked there during the band’s first North American tour supporting their debut. I was absolutely beside myself learning that my drum hero had also tracked at Mushroom. As a teenager, I was bombarded by hair metal and somewhat embraced it, until one day I heard John Bonham float through the song “Fool in the Rain.” That changed everything and opened my eyes to another dimension of drumming. Soon following, I got my hands on a Rod Morgenstein instructional video that, in a strange coincidence, broke down the execution of “Fool in the Rain” and allowed me to visualize how it was done. My new direction in drumming was clear.

For the tracking of the album Small Fame, I was beaming with inspiration upon learning the Led Zeppelin studio association, and because Bend Sinister was well rehearsed I was able to track sixteen tunes in eighteen hours. We used some interesting approaches to ensure a big drum sound. First, we took a mono feed of the drums from the control room and put it through a robust P.A. system: 10,000 watts of reinforcement to fill every inch of the room with power drums! Nothing beats hitting your kick drum and feeling the whole room shake. Another sound reinforcement technique we utilized was using multiple bass drums, stacked one in front of the other with mics placed between each one. We used three 16×24 drums and one 16×20. This made for a 6′-deep kick drum with tremendous bottom end. As for the setup, I used a set of Remo Acousticon drums. They are more or less made from cardboard and resin and have very thin shells. The sizes were 16×24, 8×12, 16×16, and 14×18. I removed the plastic wraps and installed die-cast hoops and used Coated Emperors on the top and Clear Diplomats on bottom. The snares were a custom 8×14 steel beast and a 6 1/2×14 Ayotte Keplinger, both fitted with die-cast hoops and Coated Emperors. Cymbals were a mixture of a 24″ Zildjian A Medium ride, 14″ Sabian hi-hats (both being bottoms), three 19″ or 20″ Paiste or Sabian crashes, and a 19″ Zildjian China. The combination of the thin Remo shells, die-cast hoops, Coated Emperors, and thin Diplomats bottom heads made for a very round sound with tone to spare. The bass drum had a Remo Clear Powerstroke 3 on the batter side and a clear Evans EQ2 (with one of the plies removed) on the resonate side. No dampening was used, and there was no mic hole. This was the most thunderous kick drum I’ve ever heard with considerably more bottom end. It sounds like a drum, not a cardboard box full of towels.

In support of Small Fame, we will be on the road, starting in Vancouver, then heading to the east coast, down into the U.S., and then returning to Canada to head back west. 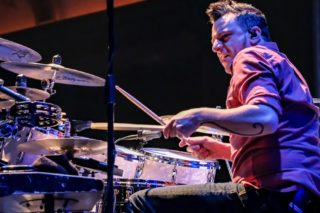 On The Beat with Austin Curcuruto of the Oak Ridge Boys: Talks Challenges, Recording Styles, and Gear