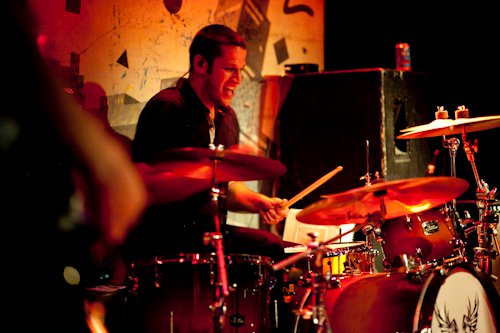 I subconsciously make weird faces when I play the drums. Sometimes I stick my tongue out. Because of this, some photographers claim they’ve never gotten a good picture of me. I tend to sweat a lot, too. You know who else stuck out his tongue and sweat a lot while performing his craft? Michael Jordan, that’s who, and he was awesome. I’m not saying I’m the Michael Jordan of drumming, but I’d like to think I put as much passion into my craft as he did. That passion and feeling comes to fruition while performing with my band Animal Talk, a Boston based, indie dance-rock band.

The ideals of dance music and rock music conflict with one another to an extent. The ideals of rock draw us in with raw emotion, amplification, and spectacle. Dance music cuts straight to our core. It makes us move, and it makes us happy. Rock drumming needs elements of power and free-spirited release, while drumming for the groove is simpler in a way, yet way more intricate. Combining the two ideals can be interesting for a drummer who once had an unhealthy obsession with the loud and sloppy bombast of Dinosaur Jr.

An appreciation for good drumming matures like an appreciation for good wine. When you’re in high school, you’ll pound Franzia straight from the box to get wasted, but when you’re a bit older you appreciate the nuances of that Chilean Malbec with your dinner. The same goes for drumming. When I was younger, I would listen to Keith Moon basically do a drum solo over a song and think it was the greatest thing ever. Of course Keith Moon was great and he was a true original, but he basically took over the whole song, keeping his bandmates hostage in a way. In my opinion, John Entwistle played the part of “drummer” for The Who. His phenomenal bass playing kept it all together.

It took me a while to buy into the “less is more” philosophy, but when I finally did, it was inspiring. I remember exactly when it happened. It was 2002 and I had just listened to Sea Change by Beck. That album is so lush and spacious. Joey Waronker’s drumming is open and airy. Every one of his hits really means something. His drumming leaves so much room for all of that atmosphere and heartfelt emotion to come though. Drumming with that kind of restraint and tastefulness is an art in itself. It is drumming with a good sense of feel and feeling.

Music inspires the shit out of me; it’s art you can actually hear and feel. Sometimes it’s so good you wish you could take a bite, too. It’s that kind of inspiration that causes me to make weird faces; it’s like my body can’t handle it.

I’m lucky enough to play music I’m proud of with a group of guys that I really love. It doesn’t get much better than that. We’re currently in the studio working on new music and playing shows and festivals like Indie Week in Toronto and CMJ in New York City.

For more on Greg Faucher and Animal Talk, go to www.animaltalkmusic.com.