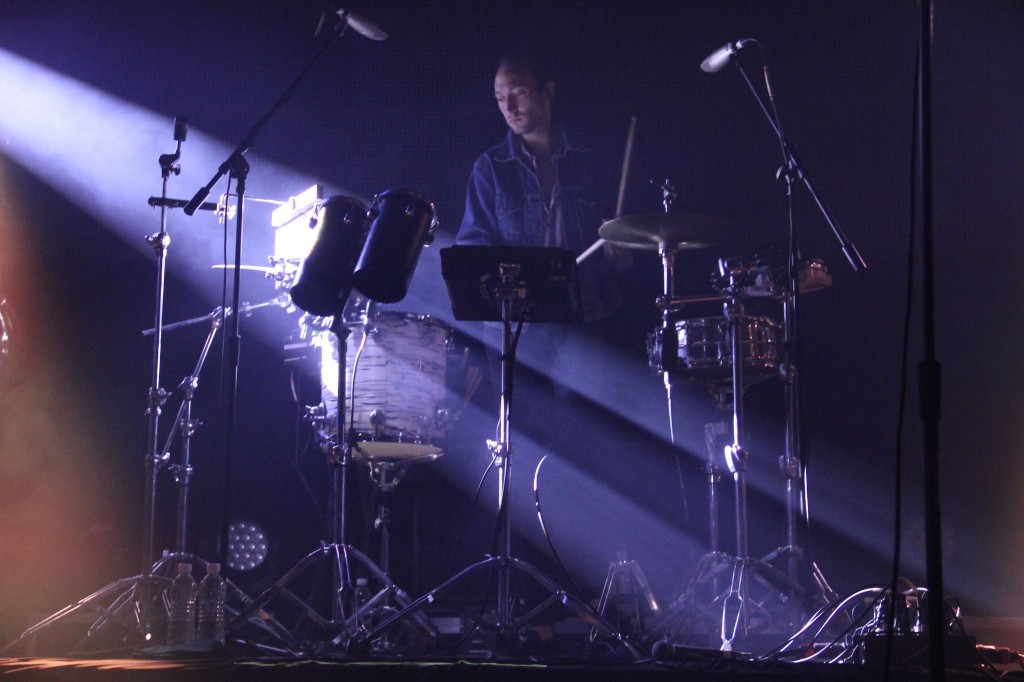 I am Cale Parks, currently drumming for the band Yeasayer. Percussion began for me at age thirteen, a gateway to after-school basement bands, which led to all-state orchestras, which prompted the scholarship that got the jazz degree, then defiance of academic music, coming to terms again, and the trip keeps evolving.

I’ve been a sideman and a solo artist. I’ve written with singers/bands/solo while sitting behind a piano, and I’ve written from behind a drumkit. Every drummer, percussionist, whatever you call yourself, should try practicing the art of not being a drummer. If you truly are a drummer thru and thru, it is in you no matter what. You can walk away from a kit for a minute and actually think about what defines that music you were just pulsating to, but have no fear, your drummerliness shall remain.

The idea of a drummer outside of his box, writing music on his own, is an age-old joke to most. Still, the idea shouldn’t be brushed off. Whether in solitude or with a group, sitting down and writing doesn’t have to be on just a piano or synth. It could be flute. It could be samplers.

Whatever the method, it’s the act itself that matters. Just as you practice your paradiddles, so should you practice your creative arranging ears. Even if no one ever hears what you write, this, more than any technical lick you play over and over, will help you become a more thought-out, musical drummer, which will lead to better fills, knowledge of structure, more creative patterns, and fresher gateways all around.

Sometimes you have to literally step out of the drummer’s box to avoid becoming locked into typical drummer habits during the creation periods. Listen to all the components of what you’re playing to and see how you fit in. Are there humans playing it live beside you? Is it a backing track? Is it you playing to your own sounds? Are you focusing on a riff? A melody? Do you even need to be playing anything at all? It’s important to remember that this is all contingent to circumstance, but then again, less is always…something.

This past spring I began rehearsing with Yeasayer for the live shows surrounding the new album, which features a large amount of heavy beat programming. The live arrangement was still up in the air in terms of percussion. After studying the recorded songs, I would sometimes turn off the sound and go for a walk, often recalling the skeletal bits of what that song was, literally feeling my fingertips twitch to what I heard in my head, ultimately realizing the essential components of what should be dropped or added from my end to the live beat situation. It took that walking around, recalling the fog of what I heard earlier, to realize what was important and really sat in the groove. The process of putting all the percussion together took a bit of sampling, resampling, shaker’ing the hi-hat, acoustifying the snare sounds to specific rooms, etc., until we came to the electro-acoustic, standing-upright space kit that I am currently behind.

Ultimately, I am a drummer who also writes music. I list the drummer part first because it’s what I’ve done the longest. I don’t mean for the world to be taken over by songwriting drummers (however funny that would be) or for drummers to take walks in the middle of rehearsals. But if I can give any advice to fellow drummers at all, it would be to exercise the compositional sides of your musicality, step back, assess, and breathe. It can only strengthen the ship.

What is the difference between a bad drummer and a vacuum?

You have to plug one of them in before it sucks.

For more on Cale Parks and Yeasayer, go to caleparks.com  or yeasayer.net.