Hey, everybody. My name is Clyde Davis, and I play drums with the Ex Senators, out of Chicago. I want to start off by saying thank you to Modern Drummer for this opportunity to share some of who I am and what I do. Our debut album comes out August 7, on HeatShield Records. The first video, for the song “Start A Fight,” is out now, and it’s really cool. I even get to have my very own semi-superhero anime character. I’m very proud of this album, and hopefully you guys will hear it and love it too.

The Ex Senators was the brainchild of lead singer DMac. We worked on a project a few years ago for Corona’s national summertime ad campaign. He always said that when the time was right, we’d work on something cool, and this is the coolest s@#t ever.

To give you some background about me, I live in one of the best cities for music. A few household names have come out of the Chi—Teddy Campbell, Todd Sucherman, Calvin Rodgers, Felix Pollard, Oscar Seaton, Gary Novak, Khari Parker, Rexsell Hardy…all great players, playing with world-class acts. Chicago is a great place to learn this craft, and the next wave of killer drummers is waiting for the right opportunity to shine. In a good week I can play with my jazz trio on Monday and Tuesday, a Latin band on Wednesday, a blues hit with the likes of Sugar Blue or Carlos Johnson or live house music with a nine-piece band on Thursday, contemporary jazz on Friday and Saturday, at church Sunday morning, and a ten-piece funky improv band on Sunday night…whew!

One other great thing about playing in Chicago is that the big ad agencies are here. I’ve been lucky to build a reputation in that section of the industry, and I regularly get calls for jingles for brands like McDonalds, Mobil, Coke, and Corona. I also get calls for television and Broadway shows in town. The one tip I’d give to players starting out or working to hone their craft is, above all else, practice, practice, practice. Play with everyone you can, but in between the gigs, play more. Work the rudiments, and get it tight.

The Ex Senators came together quickly in 2009, and then we spent about two years recording the album. In the meantime we had a minor college chart hit. The band has some really great players in it (each with ridiculous résumés), and each has something unique to bring in musical influence and personal style. Someone will have an idea, and we work as a band to find that “thing.” It’s been a blast working with these guys.

The engineer and producer on The Ex Senators album is Chris Steinmetz, who is hands down the best I’ve ever worked with. In the studio I used my Pearl Prestige Maple kit or my Noble & Cooley kit. I’ve been using Bosphorus cymbals for almost two years, as well as Silverfox sticks.

For more on Clyde Davis and the Ex Senators, go to theexsenators.com, facebook.com, or MTV.com. Check out the video for “Start A Fight” here. 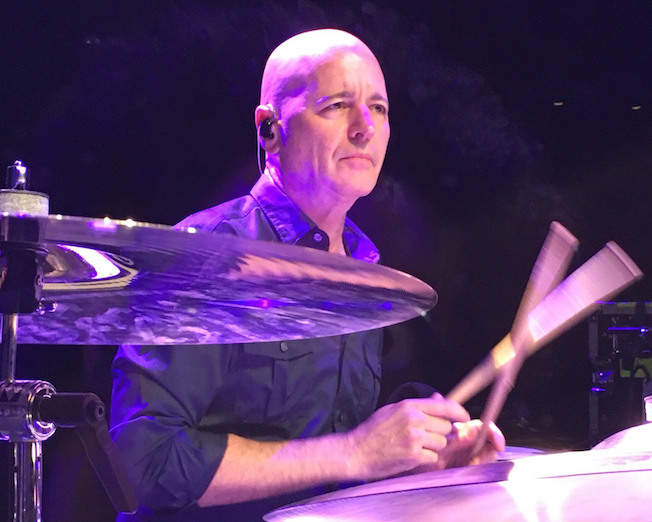 On the Beat With Sammy Merendino: Talks Kinky Boots, Cyndi Lauper, and Tour