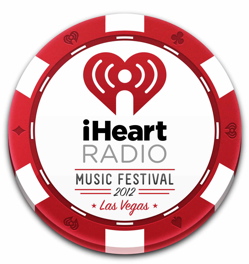 For the second year, a diverse array of some of the greatest names in music will appear on one stage over two nights at the MGM Grand in Las Vegas; Ryan Seacrest will kick off the two-day iHeartRadio Music Festival on the evening of Friday, September 21.

“The iHeartRadio Music Festival is a unique celebration of music — it’s the biggest names in the industry coming together for an impressive weekend of live entertainment,” said Ryan Seacrest.“The momentum, energy and music experience around the inaugural iHeartRadio Music Festival was incredible, and I’m excited to be a part of this must-see event.”

Artists and/or event are subject to change or cancellation without notice.