Roland U.S. is pleased to announce the V-Drums® World Championship 2, the second annual
international competition to find the top drummer in the world. 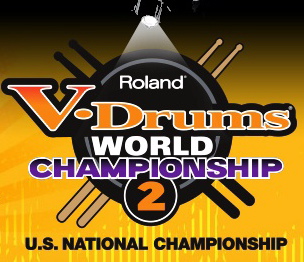 The U.S. portion of the V-Drums® World Championship 2 begins with the V-Drums U.S. NationalChampionship. The U.S. national competition gives drummers throughout the U.S. a chance to make history by competing nationwide with solo drum performances on the TD-30KV V-Drums V-Pro® Series and other Roland percussion products. Along the way, U.S. contestants can win professional percussion gear and swag, with the National Champion earning the opportunity to represent the U.S. at the V-Drums World Championship 2 in April, 2013, in Frankfurt, Germany.

Contestants start by submitting a video audition link via YouTube™ or other video sharing sites, to compete for 48 semi-finalist slots. For the video auditions, contestants can perform on either acoustic or electronic drums, and will be evaluated on musicianship, technique, style, creativity, and other criteria. Eight semi-final live events will be held nationwide on September 22 and 29 to select the final eight contestants for the national finals on October 31 at PASIC in Austin, Texas. During both the semi-final and national final events, contestants will be performing exclusively on Roland V-Drums® and other Roland electronic percussion products.

The U.S. National Champion will receive a TD-30KV V-Pro® drum set, Drum Workshop hardware, and other prizes. The runner-up will receive a TD-15KV V-Tour® drum set, Drum Workshop hardware, and other prizes. Additional prizes from Vic Firth will be awarded to selected contestants during all phases of the U.S. contest. The national finals event will include live performances by a top drumming artist and celebrity professional drummers as the guest judges. During the live events, contestants will be judged and scored on musicianship, technique, style, and the creative use of technology in their drum performances.

Entries are being accepted now through August 24, at www.RolandUS.com/VDrumsContest.