Some LOD history: In 2008 I received a call from Sterling Winfield to play drums on a CD for LOD, who had come to Texas to record their debut at Nomad Studios in Dallas. They were nice folks, and after I finally managed to understand what they were saying, I got along with them very well. Their influences are mainly American-style metal bands like Pantera and Slayer, which I am also influenced by. James, the singer, is young and has his own style that is both heavy and melodic. Rana (guitar) and Jase (bass) have a crushing sound that is all their own.

After the release of that first CD, LOD brought me to New Zealand for some tours, recording, video shoots, and lots of sightseeing. Along the way we recorded our second album, Last Man Standing.

For more on Matt Thompson and Legacy of Disorder, go to legacyofdisorder.com or mattthompsondrums.com. 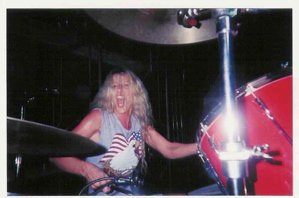 On the Beat With Rob Thomas’ Abe Fogle: Checking In From Tour Rehearsals