My name is Steve Johnson and I play drums in a band from Athens, Alabama, called Alabama Shakes. I appreciate the opportunity to take part in the Modern Drummer blog. I was first introduced to Modern Drummer when I was thirteen by my father, who is also a drummer. I remember the issue he gave me having an article in it about Tony Royster Jr. and along with the issue came a compilation CD with some of his recordings. I just remember thinking to myself, “This kid is sick!” I was so impressed by how good he was at such a young age, I was immediately compelled to practice.

I’m twenty-six now and feel like I am re-entering that point in my drumming where I am getting inspired a lot more, practicing and progressing. While in Austin, Texas, preparing for my own gig at the Continental Club, I was fortunate to catch a drummer who goes by the name “Frosty” who totally opened new doors for me. He played a small four-piece jazz kit with two ride cymbals, hats, and a cowbell. He killed it to say the least. He barely moved behind the kit, hardly anything above a shoulder shrug or head nod. So tasteful and smooth; once again, it was rather sickening to watch. To me there is nothing more inspiring than watching a great drummer at work. Not only their foot and hand work, but their communication with the rest of the band, which to me is just as important. I always looked at going to concerts like going to school. I was there to have fun, but I wanted to learn as well.

In any case, don’t ever get the impression that you can no longer progress. It’s an unfortunate feeling to slip into a rut, but the world is huge and filled with great drummers to learn from. 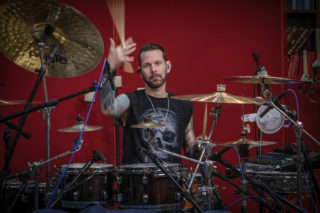 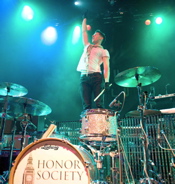