Ray Lucas is one of the unsung heroes of American music. An early accomplice of Jimi Hendrix, Lucas spent long hours jamming and performing on stage with the future guitar god. He also backed many of the top R&B and soul artists of the ’60s and ’70s, including Aretha Franklin, Roberta Flack, and Dionne Warwick. With King Curtis, Lucas opened for the Beatles on their second U.S. tour and backed Otis Redding and the Supremes at the Apollo Theater. Then he disappeared from the scene.

Noted R&B and jazz expert Jim Payne spent years trying to track down the elusive drummer, and finally did—right under his nose in New York City. You can read all about Ray’s career in the July 2012 issue of Modern Drummer magazine. Here we share impressions of the revered groovesmith from some of his most prominent peers.

Ray was an absolutely phenomenal player. He had no problem doing what he needed to do. He had great time and a superb touch. He could be the quietest person in the world and be in the groove, and when he had to be fatback, he had no problem. And he had no problem swinging either. That’s why I enjoyed him so much—he could change. Whatever the feel was, whatever the attitude needed, he had it.

Ray first embarrassed me. King Curtis kept asking Ray to let me sit in, and then when I finally did and Curtis said, “You got it,” I dropped the ball. I fell on my face. I discovered I wasn’t ready. It took four to six months before I got the opportunity again, but by then I made sure I was ready. At that time Ray had more of what Curtis wanted for the live situation.

At the time, he definitely had a better touch than I did for the jazz. That’s what caused me to go to Billy Cobham. Billy and I exchanged lessons. He was teaching me the lighter part of the jazz, and I was teaching him more of the funk.

Watching Ray, he was like an acrobat. So light on his feet—he danced on the pedals. He could take sticks and make them sound like brushes.

He enjoyed going on the road. He wanted to play live gigs. I admired him so much for what he could do. Ray was just dynamite.

I enjoyed playing with Ray. He had very good time, and he played jazz real well. Ray was always very amusing too. He laughed a lot and told a lot of jokes.

“Soul Serenade” was big for a couple of years. It was a hit record, so the King Curtis band was always working. Ray drove the van. And we worked outside of New York more than inside. We traveled a lot around the East Coast and up into Canada.

Now that I think about it, [guitarist] Cornell Dupree and Ray and I also went out on the road with the Coasters—who were great—and with the Supremes and Patti LaBelle, and with Jim “Mudcat” Grant, who was a pitcher for the Cleveland Indians. He read poetry while we played.

When we opened for the Beatles, Ringo and Paul did everything they could to stay far away from all the acts from the States. John and George hung out with us on our part of the plane, though. They even came off their floor in the hotel and were very cool. We played cards, took pictures, stuff like that.

Ray played on my first record, The Chuck Rainey Coalition. I used to always get a kick out of him taking drum solos with his bare hands. He was sort of known for that. Not like congas—he played just like he had sticks in his hands. I’m proud to say that I came up with Ray Lucas.

Ray Lucas was such a sweet cat, and he had a great touch. He could make one snare drum sound like 500 different snare drums, to give the music different colors. We’d do gigs back in ’71, ’72 with Dionne Warwick. [Collins was in a band called the Continentals, which opened for Warwick.] I learned how to play in auditoriums and in concert halls by listening to Ray. I’d go all over the room. Sometimes I’d go way in the back, and I’d still hear that snare drum—bow! bow!—and just different little tasty sounds he could do. He was very creative.

To obtain a digital copy of the July issue of MD, go to the iTunes APP Store. 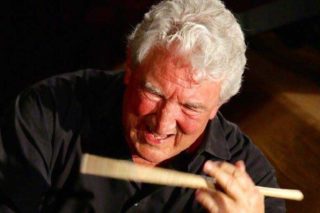 Joe Corsello in On The Beat