Andrew McFarland from the Athens, Georgia–based synth pop group Reptar speaking. Greetings from the Internet all you MD-ers out there in concrete reality! What an honor to be addressing so many MD-ers at once! Thanks, MD!

Preemptively nipping your curiosity of my personal percussive history in the bud, I’d like to take this opportunity to talk about some aspects of Reptar I find to be notable. Basically as a genre in toto, Afrofunk has been hugely influential on Reptar. Not only are the rhythms of folks like King Sunny Ade and all of the veritable Kutis intoxicating, but the drummers in seemingly every Afrofunk band consistently blow my mind. Listening to these guys gives me a similar spellbound sensation as listening to the jazz greats always does. The level of creativity within their highly complex grooves shows true mastery of the kit and the attitude. Since most of these bands were/are essentially dance bands, it’s really fun to incorporate some of the signature Afrobeat licks into my own dance-oriented playing, such as subtle mid-measure tom fills, or letting fills slide seamlessly back into to groove without a big cymbal crash. One of my personal favorites as of late is to let a fill run on through the first beat of next measure and crash on the & of 1 or the 2—so funky.

Recently, Reptar’s most exciting percussive development’s name is Reid Weigner. Reid, who is an incredible drummer/composer/general dudeguy in his own right, has played with us on and off for over a year, tickling anything from chunks of metal and shaker to bass guitar and keyboards, but now he has become more of a percussion fixture. Playing with Reid (or rather having Reid play with me, while playing to our samples) allows for an even stronger representation of what I was talking about above. Just the addition of a percussionist is sort of a nod to other types of music, specifically African and Latin, which, as drummers we can all agree, is fun. What I’ve noticed with the addition of Reid is that now the rhythm section functions almost like a band within the band, utilizing the same type of musical conversation between the two drums as what typically happens between melody instruments, or between the melody and rhythm section. I feel that having this sort of added depth in a pop band like Reptar has pushed a cool boundary within the pop realm that I’d love to hear pushed so much further.

Thanks so much, y’all! Love,

For more on Andrew McFarland and Reptar, go to reptarmusic.com. Photo by Ross Brubeck. 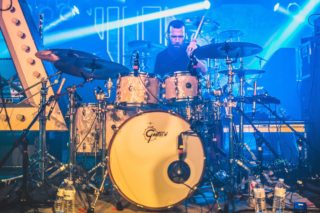 A Lot Like Birds’ Joseph Arrington: Exclusive Drum Play-Through, and Thoughts on “The Box” and Improvising on the Road