As a young drummer, Folchi desired to recover his own drums. After some research, he tracked down a manufacturer, wrapped his drums, and was surprised by the interest of drummer friends who wanted to do the same. George saw this as a business opportunity and became the first retailer of drum recovering material. For many years he provided do-it-yourself kits, and in the early 1990s three of his four children came on board and helped expand the business.

An engineer and machinist by profession, George designed and built numerous unique tools and machines that Precision Drum Company still uses today. Because he was the first to sell all the components needed to build drums, he has had a huge influence in the creation of the custom drum industry. As many custom builders will attest to, he was more than willing to aid others by sharing his expertise.

George never fully retired from Precision Drum Company. He always had his finger in the pie. Even in his eighties he maintained machinery, produced printed catalogs, and helped maintain a strong backbone for PDC. He will be greatly missed by his family, friends, and the entire drum community. 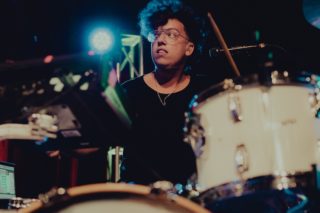 Sam Price of lovelytheband in On The Beat