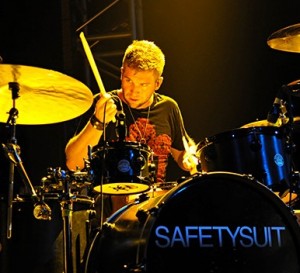 Hello, MD readers! I’m writing from my home in Nashville, Tennessee. I think I can speak for all touring musicians when I say that “home” is one of those words that can take on a whole new meaning on the road. To me it’s synonymous with family, friends, and vacation! Don’t get me wrong, I’m thankful that I’m on the road working with my best mates, but with any work, you always look forward to some time off.

Although I started as a classical pianist at the age of five, I always gravitated toward drums. My mother pretty much made me take lessons, which I fought and lost, but I’m grateful she made me stick with it for the ten years I studied. It gave me a foundation for all things music.

At fourteen, my parents bought me my first kit, a late-’70s Pearl fiberglass that I’d give anything to find now. I was self-taught by albums that changed the tide in the ’90s, mainly stuff by Nirvana, Pearl Jam, and Smashing Pumpkins, to name a few. I’d put on my headphones for hours and try to imitate the drummers on them. What I didn’t realize then was that this gave me a sense of feel and intuition to play with a band, and as a bonus, timing.

Years later I got a music scholarship and continued my classical training, while playing in local bands. After I moved to Nashville with SafetySuit in 2004, I continued my studies for a short stint with Charlie Adams. He taught Jimmy Chamberlin, so I was in! SafetySuit got its record deal in ’07, we recorded our album, and we’ve been on the road ever since.

We started our second album in late ’09 but weren’t feeling it, so we literally trashed the hard drives and started over! The reality was that we were burned out and just needed to go live life. Nobody really wants to hear songs about the road, so we had to get out to have a sense of what’s going on.

Then we teamed up with producers Espionage, Howard Benson, and Ryan Tedder in the studio. I played several kits since there were different producers. One was a vintage Slingerland that lives at Howard’s studio in L.A. I’ve never played a kick that had such a nice combination of click, punch, and especially woof/fluff to it. Sabian sent me a couple of cool options to try as well, and I loved the Paragon and Holy Chinas.

What I’m most excited about, outside of SafetySuit, is mixing. I’ve always had a fascination with that, because it’s so left- and right-brain involved, and I love psychoacoustics. I’m certain that’s how I’m wired, so when I sort of fell into it, it felt natural to me. I had the opportunity to mix four songs on this new album, and I mix overflow for a well-known mixer here in Nashville, who I’ll leave unnamed out of respect.

Our latest album, These Times, was only out for a few weeks when it took the number-one slot on iTunes, and it debuted at number 7 on Billboard’s Top 200 chart. We were shocked and thankful, knowing that all the hard work over the years seemed to be paying off. This business is unpredictable, so to get any sort of movement these days is a victory.

To me music is fun first and work second, and I love how it bridges people. As long as I can do it and support my family, I’ll be one happy guy and will never take it for granted.

Photo by Nichole Harris. For more on Tate Cunningham and SafetySuit, go to www.safetysuitmusic.com.