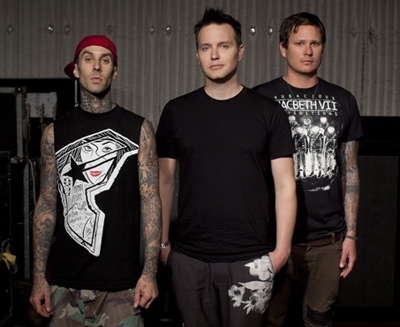 Multiplatinum-selling, #1-charting rockers Blink-182 announced today several tour dates in May surrounding the group’s co-headlining of The Bamboozle Festival 2012 (with Bon Jovi and Foo Fighters). In addition to Blink-182’s Bamboozle performance on Saturday, May 19 at the North Beach boardwalk in Asbury Park, NJ, the band has scheduled major arena shows in upstate New York as well as New Hampshire, Connecticut, Pennsylvania, and Quebec City (see schedule below).

The most recent video from 2011’s Neighborhoods (DGC/Interscope Records), Blink-182’s first new album in eight years, which debuted at #2 on the Billboard 200, is for the hit single “After Midnight”.  Says singer-bassist Mark Hoppus of the video: “We wanted something that was a little troubled because the song is a troubled love song. Isaac (Rentz, the director) came up with this idea of a guy and a girl trapped inside of an insane asylum. They find one another, they escape themselves for the evening and they have a night of reckless romance before they get put back into their cells.”