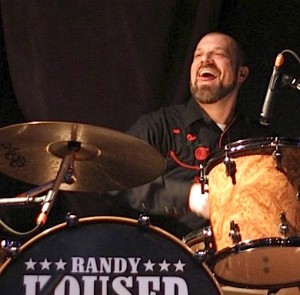 Hello there, Modern Drummers! I’m Kevin Murphy, drummer for Tonic (rock) and Randy Houser (country), posting from the road, cramming ten songs into my head for a show tonight for an unsigned artist’s last-minute gig.

Such events aren’t anomalies; in fact they are commonplace for the Nashville-based drummer these days. Even those of us who are lucky enough to have solid, consistent work take emergency gigs for friends or unknown artists, especially over the holiday months, when tours and recordings slow down. I look at it as a chance to improve my game, to perfect my craft. Where a Tonic or Houser show may be thrilling because of the crowd size or energy, the last-minute show of ten originals, running tracks and playing to a click, is sometimes exhilarating, reminding me of that nervousness I felt in the early days of playing live. It’s a thrill to be on that edge, senses firing, really listening to the music around you and reading the body language of your fellow performers. I love it! Accepting a lower-profile gig and nailing it on the fly creates a fantastic energy, a healing energy, and usually turns into future work, so I make it a habit of saying “yes” to everything. Cultivating new friendships and professional relationships is never a bad idea.

After tonight’s show I’ll ride the bus back to Nashville, then spend some time preparing sixteen new songs for a couple of shows with country artist Chuck Wicks. I also did a couple of Christmas tracks that I produced for season-two American Idol finalist Josh Gracin, and now I’m working on a few new smaller production projects. I’m excited to produce without playing drums for a change, and I’m hoping it will help me gain even more focus and perspective for both jobs. I co-produced and played drums on Josh Gracin’s third album, Redemption, and would love for you guys to check it out and pass along any thoughts you might have. See the link below.

Touring usually slows down at the end of the year out of Nashville, so it gave me time to work on my studio and websites, which will allow me to handle more Skype students and “e-sessions” from home and on the road in the future. I think I’ll ask Nashville’s drumming community to join me for a lunch and pick their brains for more ideas, because whatever town you’re in, drumming is a brotherhood and we can all achieve more by embracing the connection we share through the instrument.

It’s been great sharing my blog with you, and I’ll see you out there in 2012. Cheers!

For more on Kevin Murphy, go to www.facebook.com/bigrightfoot, and to hear Josh Gracin, visit iTunes. http://itunes.apple.com/us/album/redemption/id473053463