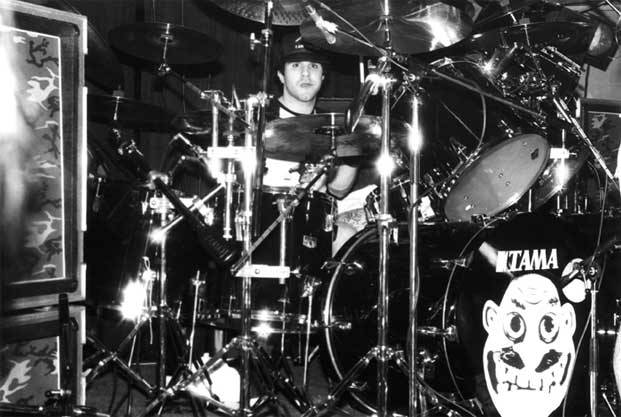 The 2011 Big Four tour featuring Metallica, Slayer, Megadeth, and Anthrax solidified Anthrax as both legends and prevailing lords of the mosh, and culminated in a profound hometown show on September 14 at Yankee Stadium. “I think everything in life has to be appreciated in the moment,” says Bronx native Charlie Benante, “but with an occasion as monumental as the Yankee Stadium gig, you treat it as though you’re eating the greatest piece of pie you ever had in your life, and just consume every last crumb.”

One day earlier, Anthrax officially released their long-anticipated album Worship Music, which debuted at #12 on Billboard’s Top 200 Albums chart. This was the band’s first studio album since 2003’s We’ve Come for You All, and marked the return of “classic-era” singer Joey Belladonna. The band ended the year completing the first leg of their wildly successful co-headlining tour with Testament (with Death Angel as the main support act), and will kick off 2012 with the second leg of that tour.

Worship Music is a metal manifesto depicting a band that after thirty years is closer to hitting their stride than preparing for their swan song. Benante’s drumming is simply astounding, and both his songwriting and drum parts show maturity in structure and choices, while maintaining a rawness, proving that thrash can be simultaneously pure, perceptive, and pugnacious. The resultant sound is an intoxicating hybrid of classic and modern thrash metal that Benante and brood are bringing to the stage with the same passion, precision, fun, and intensity they always have, setting the bar frighteningly high for new generations of metal bands.

MD Online spoke with Charlie about the making of Worship Music, and he’s the subject of our Influences feature in the February’s issue of Modern Drummer magazine. Benante has an identifiable sound that’s melodically aggressive, with his drums tuned for warmth, tone, and attack rather than thud and click. You could say his playing is sophisticatedly streetwise, the art of a self-taught but innately talented musician whose uniqueness simply cannot be learned, even through countless years of dedication to the craft. You just have to have it—and Charlie Benante has it.

MD: The production value on Worship Music is quite aggressive, yet there’s still a great deal of warmth and liveliness on the recording, especially from on the drums. It seems that’s been missing from other modern metal releases. How did you track your drum parts?

Charlie: I recorded the drums to tape, and then they were bounced. I miss the warmth and tape saturation you get from analog. I actually don’t mind hearing some hiss on records, because it adds to the atmosphere. We live in the days where some drummers feel the need to record digitally and then have their drumming edited together and quantized, and it ends up sounding very robotic. It takes the life out of the song. I like when choruses naturally speed up, because it shows that a human is playing it—that human factor is what’s been missing.

MD: In the ’80s Anthrax showed several unique characteristics that made the band stand out from the rest of the bands in the Big Four, as well as from other thrash bands—Joey Belladonna’s voice, Frank Bello’s bass sound, but probably most of all, your drum sound. You always had a brightness and liveliness as opposed to the darker, shorter sustain heard on other band’s albums. What influenced your sound?

Charlie: I love old jazz playing. Growing up watching Johnny Carson, I got to see Ed Shaughnessy and Buddy Rich, and they tuned their drums really high and open. Drums should sound alive! They shouldn’t sound dead or synthetic.

MD: How long did it take you to track the drums for Worship Music?

Charlie: I started recording songs for the record back in 2009. The first batch was recorded over a four-day period, and maybe fifty-five percent of what I recorded then stayed on the record. A year later, in a different studio with a different kit, I recorded some more songs. And then I went back in again to record the last batch and re-record some songs that I changed after we started playing them live.

MD: What songs were reworked or changed after playing them live?

Charlie: “Judas Priest,” “In the End,” “Fight ’Em Til You Can’t,” and “The Devil You Know” were all reworked along the way, or recorded at different times. “Fight ’Em” changed quite a bit. Maybe sixty percent of what I initially played is the same, but it became a whole different animal when we started playing it live. I was playing it much better, so at the end of that tour I went back and rerecorded it. The song was sounding pretty ferocious, and that’s what I wanted to capture on tape.

MD: I imagine having the opportunity to go back and re-track songs is not something that presents itself often.

Charlie: We had the luxury of being able to go back and do that, but doing so made for a better performance. Typically, drummers are the first to record, and then ten months later the album is done, and you listen to the finished product and think, “Wow, I wish I would have played that fill differently.” I think Sting once said that the process of making records and then touring is backwards, because by the end of the tour you’re so familiar with the songs and playing them so much better.

MD: “Fight ’Em” has some seriously nasty drum patterns and fills going on.

Charlie: There are two breaks in that song, and the second one wasn’t initially in the song. There’s the “Latin feel” drum part right after the second chorus, and then there are the fills after the solo. I was playing the “Tom Sawyer” drum fills in that spot as a joke because they fit. Then the guys started coming to the kit and screaming, “Rush! Rush!” when that part was coming up. Although I loved those fills, I knew I couldn’t record the song that way. So I came up with different fills and patterns. Every so often when we play it live I’ll throw in the “Tom Sawyer” fills.

MD: What are you playing at the tail end of the Latin feel, when the rides come in?

Charlie: I have two rides set up, my main ride and one on my left, so I’m just bouncing between the toms and then off the bells of the rides. The ride accents added all these colors to that section. That part is definitely a challenge.

Whenever I read an article about a drummer I respect, they always seem to talk about challenging themselves or continually moving towards something new with their playing, and “Fight ’Em” is a challenge. Before that part comes in, I can’t push it. I have to go into it calmly and let it build. If I go into it too aggressively it just doesn’t come out right. 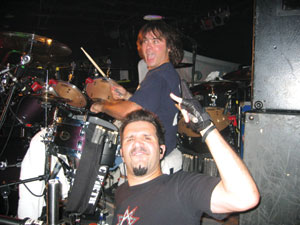 MD: You and Frank Bello are such a tight rhythm section, even though your parts don’t really lock in with one another. He seems to find the spaces between you and the guitars without stepping on anyone else or taking away from the pulse of the song.

Charlie: Right. I actually tend to lock in with Scott’s guitar more, and Frankie is kinda out finding the holes, which makes his parts stand out. It’s funny, because Metallica is the same way. Lars and James lock in with each other; same with Slayer. The right hand of the rhythm guitars and the drums tend to go together.

MD: How did the title “Worship Music” come about?

Charlie: The story behind the name is that I fell asleep with the TV on one night and woke up at five in the morning, and there was this show on called “Worship Music.” It was a Sunday morning sermon thing, and a light bulb went off—“That’s a great title!” I wrote the opening title track instrumental because I wanted something that would set up the record. It reminds me of the sun rising, and the day is starting, and then…boom, “Earth On Hell” crushes right in. That’s how each day starts for me. The sun comes up and then bam…the shit happens.

MD: There’s a double entendre happening, where worship music is viewed as a form of music, but the phrase can also be interpreted as a declaration to worship music.

Charlie: Yeah, that’s the thing, because to everyone that loves music, and especially for hard rock and metal fans, music is what they worship. They may have a handful of bands they follow and stand by through thick and thin, buy every album and just worship. Bands help them through life’s good times and bad times, and their devotion is a form of faith. I don’t go a day without listening to music.

MD: Speaking of which, the new material sounds very fresh and relevant, but the classic Anthrax sound is still in there. With Joey back in the band, did you feel any pressure to recapture the past magic, or just try to stay in the moment?

Charlie: I never really think of the old material or live in the past, yet there are elements of it in what I write. I still write songs on the same guitar that I did back in the day. I say that that guitar is magic, because there are just so many songs in it, but if I feel that I’m writing something that sounds dated, it probably won’t last.

I’m sure there are bands that are trying to relive a record that brought them acclaim and trying to write that record over and over again. But there are also bands that just have a certain sound, like AC/DC or the Ramones. You sometimes have to just let a song be what it wants to be, and not try to rewrite it or cut it to fit what you think it should be.

Charlie: Anything can inspire me. Movies, music…the other night I went to see the Foo Fighters at a small club, and that was inspiring. I came home, set up my digital recorder, started playing guitar, and just let it go. Watching another band have a great show—that always triggers my creative energy.