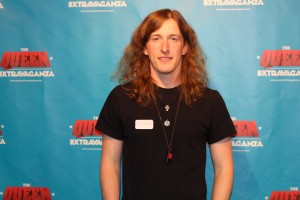 It’s more than a thrill to be announced as the drummer for Queen Extravaganza! Roger Taylor, one of my favorite and most inspirational musicians, picked me as their new drummer! It’s insane. And I found out while I was on a roof, no less!

I’d like to take a moment to thank Billy, Nico, and Zach, the other finalists for the drum spot, for easily being the nicest, most personable group of guys at the auditions. [Watch for their blog posts in the coming days.] We all had each other’s backs, and we just wanted to have fun playing, hanging, and celebrating the chance to be where we were: with Roger, Trip, Spike Edney, and Jim Beach, at studio 606. Amazing! Thanks to my parents for being Queen freaks, to my grandparents, my sisters, my girlfriend, Jessie, my college instructors Lalo Davila and Tommy G, and to my percussion instructor Nancy Mathesen.

This was my journey: Not many people get an opportunity to meet one of their childhood heroes (and promptly get judged by them), but today was one of those days for me. I grew up listening to Queen; memorizing songs, studying Roger Taylor’s technique, and just fully engulfing myself in all the aspects of their music.

I found out about the QE contest through their official website. Being a fan, every now and then I’d check their websites to see if any new stuff was coming out—concerts, documentaries, etc. When I saw the press release for the QE audition, my first thought was, “Why not”? So I sent in a drum audition, a vocal audition, and a guitar audition (I play a few instruments), and then sort of filed it away in my brain. Then I saw that they’d announced the semi-finalists, and I was one of them.

Then it hit me. I might actually get to the finals in L.A. I might actually get to meet Roger Taylor. This could happen! So I gave it my all in the second-round audition, and it paid off. We all arrived in L.A., hung out a little afterward, and then I promptly crashed so I’d be ready for the day. And what a day, filled with adrenaline, anticipation, and way too many M&Ms—and one of Dave Grohl’s beers from the fridge! Everything moved relatively smoothly yet break-neck. Most importantly, though, the one thing that struck me was how insanely courteous, down to earth, and normal everyone was, and not just the other contestants but also the Queen camp as well. Good vibes all round.

My drumming technique is a little different from most drummers these days, especially those my age. A lot of modern drummers like their setup tight, within a finger’s reach of their body. I like to be able to stretch and work for my drums. That’s my comfort zone: having room to breathe behind my drums. It also allows me to be a little more animated with my playing. I’d like to think of my setup as being a combination of Roger’s massiveness (and eccentricities) and Neil Peart’s fluidness (especially in his setups from 1996 and beyond). I hit pretty hard too!

Having the opportunity to play the music that I learned to play music on is huge. I think that gave me a leg up as well, because I didn’t over-analyze anything I did, which can be dangerous in the audition process. I just did my drummy thing and got an incredibly warm response. Here’s to all the other contestants giving their all, and for being such cool people!