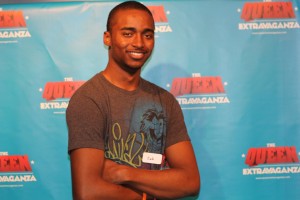 Hey, everyone! My name is Zach Mullings, and I’m from Miramar, Florida. I’m one of the four drummers who were picked to audition for the Queen Extravaganza in L.A. First off, let me say how thrilled I am to be featured on Modern Drummer’s website. I have been a big fan and have been reading for about ten years.

I heard about the live show from my school’s website. I honestly didn’t expect much from it. I just thought I’d make a video, send it in, and see if anything would come out of it. The day after I sent in the video, I was notified that I got in. I was ecstatic that Roger Taylor, one of the greatest drummers in rock ’n’ roll, had picked me to compete in the next round. Round 2 was a bit more hectic for me because it was based on public voting. I didn’t know what to expect. There were all these great drummers shooting for this spot, and I didn’t know what to think. I remember the day that I was notified that I had made the cut. I was so excited that I yelled and woke up my roommate. (Sorry, Jeremy!) It was just amazing to have been chosen to go to L.A. to play for Roger Taylor and his crew.

The experience in LA was been unbelievable. I met some incredible musicians. I was a little wary about meeting the other three drummers, but it turned out that they were all cool guys and awesome drummers as well. Billy Orrico, Tyler Warren, and Nico Saavedra were great guys to hang and talk drums with.

Right now I’m a third-semester student at Berklee College of Music (along with Roy Ziv, who also made it to L.A.). I’m studying contemporary writing and production, but I believe that I’ve always belonged on stage, performing with other people.

As far as my hand technique goes, depending on the genre, I mainly use German grip, but I like to use traditional grip when playing jazz and funk. Being at Berklee, you have so many drummers all trying to learn from each other, and I learned a great deal of techniques, grooves, and chops from fellow colleagues in the gospel groups and funk groups. Some of my favorite drummers are Vinnie Colaiuta, Steve Gadd, Chris Coleman, Darren King, Neil Peart, and, of course, Roger Taylor. I think all these drummers not only have great chops and skills, but they tell stories with their music. They play for the song and not for themselves, and as a drummer I try to stress that in my playing, no matter what style of music.

I feel like this experience was a start to some great opportunities. I appreciate all who voted for me and for all the support. God’s given me a gift and I intend to glorify Him with this gift. God bless you guys!

For more on Zach Mullings, go to www.facebook.com/ztmdrum.