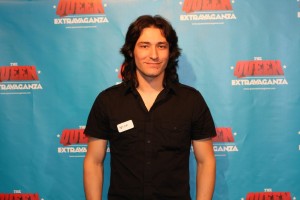 The Queen Extravaganza competition has been a great experience. I first heard about it through the Queen website, which is a place I tend to visit often since I’m a big fan. Then a friend of mine texted me about it and told me I should try out for the drummer position. I disregarded the idea at first, since I don’t sing and Roger Taylor does in the band.

Weeks later I traveled to Florida to play some shows. While there, I saw a post about the auditions that were on the site and went to check out the drum auditions. None of the drummers were actually singing, so I freaked out. Right then I decided that I wanted to be the drummer for this band and recorded my first audition as soon as I came back to California.

One of my fantasies from a musical perspective has been to be Roger Taylor so that I could drum to all of the Queen songs alongside John Deacon, Queen’s bass player. This opportunity is the closest I can get to reach that fantasy.

I was very happy to have been chosen by Roger Taylor to move forward in the competition and to play in front of him and the Queen team.

I’m originally from Santiago, Chile, but I’ve been living in California for thirteen years. I’ve been drumming for nineteen years. I play for multiple bands in the U.S., as well as bands from Latin America, including Love Grenades, Pop Noir, Dear Darling, Lucybell, Enjambre, Claudio Valenzuela, Hidalgo, Silvestre, Totally Radd!!, Gametilians, and Nasti Amantes. I keep myself busy working for bands, averaging about fifty shows a year. I play different styles in all of the bands I perform with, such as rock, electronic, new wave, alternative, metal, pop, dance, and progressive, but I consider myself a rock drummer more than anything else.

For more on Nico Saavedra, go to www.facebook.com/nicosaavedramusic.