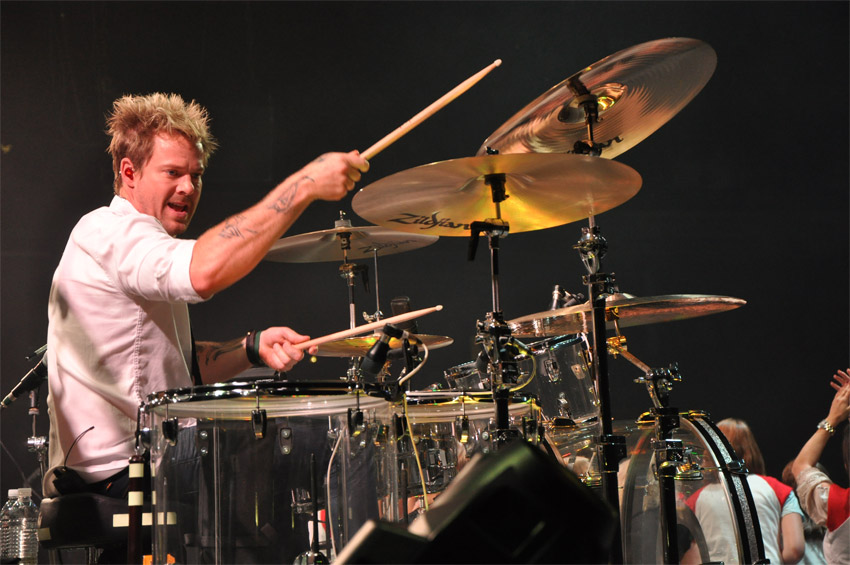 Everyone in the music business is talking about declining sales and canceled tours. Everyone except the band known as Train. Their album Save Me, San Francisco includes the hit “Hey, Soul Sister,” which has now sold five million units in the United States alone, more that any single in the history of Columbia Records. With a second major hit, “Marry Me,” keeping them at the top of the charts in multiple countries around the world, it’s no wonder Train has been touring for two and a half years in support of the album. MD caught up with drummer Scott Underwood for a quick interview prior to a recent show.

MD: Tell us about your early drumming experiences. You played in your high school jazz band, correct?

Scott: I grew up in Saratoga Springs, New York, and yes, I played in my high school jazz band for a year and a half. A friend of mine who played in a punk rock band and also in the jazz band had quit high school. They called me and asked me if I would come play in the jazz band. I couldn’t read music, but the instructor really liked my feel so he was willing to overlook the fact that I couldn’t read the charts. He said we’d just figure the songs out. The band actually won several awards during that time. I did that during my junior and senior high school years.

MD: What was next after high school?

Scott: I went to college but I didn’t really know what I wanted to do. I dropped out a couple of times and I tried new majors. I actually wanted to go to Berklee, but my father said he wasn’t going to send me to a “rock ’n’ roll school.” The whole time I was doing that I was playing in bands and doing gigs. I finally realized that I wasn’t good at holding a job, and I didn’t like college, but I could play gigs and was pretty good at that.

MD: Did you seek out other avenues for drum training?

Scott: I eventually did some online study with Berklee. Not being heavily instructed, I developed my own approach to drumming that might not be technically profound, but I believe in a drummer developing his or her own style. I may hold the drumsticks incorrectly because I’m not formally trained, but it’s a style that works for me.

MD: How did you get connected with Train?

Scott: After my trials with college, I moved to Colorado. I started playing in bands with a bunch of musicians from California. This one guy was telling me that there was a band forming in San Francisco called Train. It was an acoustic trio—two guys on guitar, with Pat [Monahan] singing and playing hand drums. They needed bass and drums, so we moved out to San Francisco to join Train.

MD: The musicians in the keyboard and bass positions for Train have changed twice, but you’ve hung in there. What was it about Train that made you stay with it?

Scott: At first, as far as drumming was concerned, the music we were playing in Train wasn’t that technical. Before Train, I was playing much more challenging material; difficult grooves, odd time signatures and such. I had conceptualized the Train material in a sort of Neil Young manner and was approaching it that way. I noticed I wasn’t getting much attention, so I decided maybe I should step things up a bit. In the end, what really mattered, though, was the song. Pat is so good at song writing that it became a challenge for me to come up with just the right part to fit these songs that had perfect verses, perfect choruses. That was what made it interesting.

Another part of it was that everyone in the band was serious about it. We’ve all been in bands where one or two guys are really into it but rest aren’t dedicated. We were all like-minded about Train. We gave ourselves no other option but that this band would work out.

Scott: I personally was burned out from touring and making records and wanted to take a break. We had started trying to write songs with the goal in mind of having another hit record or Grammy Award. We had lost the original spirit of what we were all about. We didn’t enjoy being around each other anymore, and for all I knew we were breaking up at that point.

I went to L.A. and tried to get into the session world. That was way harder than I thought it would be. I would call drummers that I knew and ask about work, but if work came in, they took it. What we all realized during that time was that we are really lucky guys. What we have in Train is a very rare thing. Pat made a solo record and after that he called and said, “I need you guys.” We all started realizing that we needed each other. Pat is a great singer, and it’s great to get to play for him. We started enjoying the music again, and I think it’s that sense of knowing that we need each other and appreciate each other that makes Save Me, San Francisco such a great record.

MD: Are you involved in any outside projects?

Scott: Train is it right now. I have a little side project called Food Pill, so at some point I may do something more with that. We’ve been on tour for two and a half years with this record, so there hasn’t been time for anything else.

MD: You’ve co-written some of Train’s material. What’s your advice for drummers who want to get involved in songwriting?

Scott: Starting at a young age, learn a melodic instrument. I learned piano but not at a young enough age to be proficient at it. I do play piano on “Marry Me” during our shows. I may try to surprise everyone by showing up one day knowing how to play “Drops of Jupiter.” You need to learn piano, guitar, or some other melodic instrument and also learn Pro Tools. When I write a piece of music, I’m very structured about the verses, chorus, bridge, and I think that’s the drummer in me.

MD: What’s your warmup routine before going on stage?

Scott: It used to be rudiments. Sometimes I play electronic music or listen to a metronome and change the BPM. I saw a Jojo Mayer video—I think everyone saw that video—and now I use some of his warmup methods. One day I did pushups before a show and found it warmed up my whole body. Lately I’ve been lifting weights again with the idea of warming up my whole body.