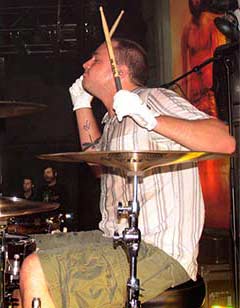 Earlier this month, drummer Chris Pennie left Coheed and Cambria, and now Pennie’s predecessor, Josh Eppard, who played with the band from 2000 to 2006, has rejoined.

In a press release on its website, Coheed says, “Chris Pennie is a dear friend, a superb bandmate and one of the best drummers in the world. He brought a workmanship and sense of professionalism to Coheed that completely improved us as a band, and allowed us to reach new heights. He will always be a member of the Coheed family, and we ask you to support all his endeavors.

“As the songs for the new record began twisting into shape, it slowly became apparent that these songs could truly flourish with the groove-oriented approach that Josh naturally brings to the table. We also missed Josh as a person—what he meant to us as friends and the energy and humor he exudes. But this isn’t about nostalgia; it’s about who we are now, and what we can achieve musically and as a family, together going forward.”

In his own statement on the band’s site, Eppard says, “Life is odd. I honestly never thought I’d see the day I would be reunited with my bandmates and lifelong friends. I regretted not being a part of Coheed from the day they moved on. After my time in Coheed, I eventually got clean and got real with myself. With the help of my loved ones I got back on my feet and that meant playing music again. I’d like to extend an enormous debt of gratitude to Fred Mascherino, who I played with in Terrible Things for the last 2 years. It’s no secret that with the damage I had done to my reputation, no one was taking any chances on me. Fred did and I thank him for that. That being said, it was always clear to me playing with anyone that it would never be the magic that I felt with Coheed. I can’t believe I get a chance to play for the best fans in the world again. Not many people get a chance to put back together the things they broke long ago. It’s good to be back.”

Coheed and Cambria’s press release says the band has entered the studio with Eppard to begin work on its sixth album.