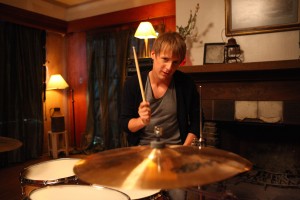 Hi, everyone, I’m the drummer for British indie-pop quintet Scars on 45. We’re a new band, along the lines of Fleetwood Mac, Coldplay, Death Cab for Cutie, and Snow Patrol. We signed with Chop Shop/Atlantic in the U.S.A. before we had any label interest back home, so we basically spend all our time touring over here. No complaints—the food and weather are LOADS better!

We released our debut EP, Give Me Something, this year and watched the title track climb its way to number three on the radio charts, staying in the top five for fifteen weeks. We couldn’t believe it! We have also been lucky enough to have our second single, “Heart on Fire,” used as the promo track for the newest Grey’s Anatomy soundtrack, which has been great exposure for us. Grey’s helped break bands like the Fray and Snow Patrol in the U.S.A., so we’re very honored to be a part of it, especially so early on. Our four-track EP just came out, and we’ll have our full-length debut album out next year. We’ve been touring the U.S. nearly non-stop this year, and we’re currently out with Matt Nathanson. We’ll be joining Jack’s Mannequin for a run of shows as well before playing some radio shows leading into the holidays.

Our music is all melody-driven pop, so my job is to serve the song, providing the groove and feel to get people on their feet. Before I joined Scars I used to teach drums privately and session for other U.K. acts of all sorts of genres, but I’ve always been most passionate about songs and finding the best part, sound, and feel for each track. It’s so important to find the pocket for a song and to make people move in some way when they listen to your playing. I love players like Steve Jordan, Jim Keltner, Abe Laboriel Jr., Shawn Pelton, and Amir “Questlove” Thompson, who have the chops, but only rip them out when the space is there. Drumming with class!

I’d like to thank Modern Drummer for inviting me to write this blog. It really is an honor to be a part of the magazine that has inspired, tutored, and entertained me for so many years. I must also thank the companies that have supported me, even at this early stage of our career: C&C drums, Paiste cymbals, Vater sticks, and Remo drumheads—all you guys are amazing. I’m so lucky to be able to use such incredible instruments every night. Last of all, thanks to you all for reading. Hope to see you at a show some time!

For more on Chris Durling and Scars on 45, go to www.scarson45.com.