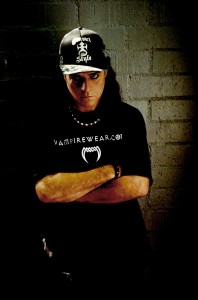 Hello, MD readers! It’s BooM (Rick Steel). I still remember the last time I spoke with Modern Drummer founder Ron Spagnardi. After receiving a copy of his latest drum book at the time, I called to thank him. We talked about his writing process. I let him know that I was not published. Ron told me one thing I would never forget. He said, “Whatever you write, pour your passion into it!” These were wise words that I never forgot.

As I was getting ready to perform at the 1998 Montreal Drum Festival, I heard someone talking about a drummer using double strokes while tearing it up on the double pedal. (Later I found out it was Virgil Donati.) Once back in Los Angeles, I attempted this. I was unsuccessful, frustrated, and unhappy—but I was motivated and determined! I wanted to be in the “200 Club,” playing 16th notes at 200 beats per minute. Thus, I continued searching.

Then I remember seeing an ad in MD. It was something about “Ballistic Drumming.” I called the 800 number and left my information. What arrived was amazing! Joe Stronsick (“the ballistic drummer”) sent me a tape of some insane, scary double pedal grooves. This got me to order his system. When his package arrived, I dropped all the items on my bed. There were DVDs, CDs, cassettes, and charts. I jumped right into it. By “reverse engineering” all the material, I boiled it down to two key items. This put me on a crash course to learn these techniques as fast as I could. After about a month, I was able to play constant double strokes on my double pedal. I thought I was getting closer to “the club.”

Once done, I thought, “Now what”? Then I remembered what Roy Burns did when I was his student. After Roy beefed up my hand chops, he had me review all the forty rudiments. I had an epiphany: If it worked for my hands—and it did—it could work for my feet! Unknown to me at the time, I was taking my first steps to putting rudiments on the feet. First I applied my double strokes as a five-stroke roll, then as a seven-stroke, etc. Later I picked out some flams. After that, it made sense to work out some ruffs. Finally I whipped up some paradiddles. Along the way, I jotted down all my notes. I had to create tutorials for each. When I finished, I realized I had created twenty-six rudiments for the feet. Thus, I called them the “footiments.”

Now it was time to step back and look at what I had created. I thought, “What’s the use of just playing a seventeen-stroke roll with my feet”? It was time to create drum beats for each footiment. When I finished, I realized I had boiled down a technique to two main moves, created tutorials to apply these moves as footiments, and came up with multiple drum beats for each one. I had a book.

After getting some publishing tips, I put the book together. My book is now available online at www.thefootiments.com. If you want to see them in action, go to www.youtube.com/thefootiments. I hope my book inspires you and that you can sense my passion for the double pedal. It looks like Ron was right!