As heartland rock icon Bob Seger tours arenas across the United States, we revisit our September 1999 interview with his longtime sidekick Don Brewer, who’s beloved among drummers for his classic work with Grand Funk Railroad.

Don Brewer is a contented man. Thirty years after Grand Funk Railroad roared out of Flint, Michigan, he can look back on the vindictiveness of a powerful ex-manager, near financial ruin at the hands of the IRS, and even falling out of favor with the masses, and still be proud of his band’s stature.

The gory details of Grand Funk’s woes were recently recounted on an episode of VH1’s Behind The Music. Brewer isn’t opposed to rehashing them here, yet his enthusiasm regarding the band’s current wave of popularity makes it all seem like so many years ago. Two new books, including a collection of fans’ stories compiled by Brewer’s wife, Sunny Quinn, several Web sites, and an elaborate Grand Funk CD anthology are almost enough to make Don Brewer forget all the heartaches.

Right from the start, Grand Funk was known as “the people’s band,” a tag they’ve gladly worn since slaying an unsuspecting crowd of over 100,000 at the 1969 Atlanta Pop Festival. Taking the heavy trio approach made popular by Jimi Hendrix and Cream, the band set themselves apart by spiking the mix with some R&B/Motown soulfulness. They became huge fast, racking up consecutive platinum albums and selling out Shea Stadium even faster then the Beatles had. By the end of the ’70s they had left a legacy of great heavy pop tunes any band would be proud of: “Closer To Home/I’m Your Captain,” “We’re An American Band,” “Walk Like A Man,” “The Loco-Motion,” “Some Kind Of Wonderful,” “Bad Time.” HUGE hits, each totally unique, yet each possessing the power to make you wanna jump in a Mustang convertible, floor the gas pedal, and blast your Kenwood speakers so loud you scare pedestrians.

Then came disco. And click tracks. And the rise of corporate radio programming. Almost as fast as they appeared, Grand Funk were gone. An early ’80s reunion provided too little too soon, and Brewer, singer/guitarist Mark Farner, and bassist Mel Schacher learned to live life without the Funk. Brewer went on to play with Pat Travers and back up Bob Seger on a couple of tours, but Grand Funk, it seemed, was history.

But then…. Then came the ’90s. Hip grunge bands had a huge debt to pay to ’70s musical giants like Led Zeppelin and Black Sabbath. The idea of hearing Grand Funk on the radio didn’t seem strange anymore. “All of a sudden,” says Brewer, “people are knocking on our door: ‘Hey, why don’t you guys get back together?’”

The band carefully considered the possibilities. “It took us a few years to get it together,” Don explains, “because we wanted to be true to our fans and present Grand Funk in its best light. It took us a while to convince promoters not to just throw us into the local bar, like they were doing with a lot of the classic rock acts. It was amazing how easily it came back to us, though. There is just this chemistry between Mark, Mel, and me that doesn’t exist anyplace else for the three of us.”

To test the waters, the band did around fifteen shows in 1996. “We wanted to make sure we could be out on the road together. We also were concerned there might not be an audience,” Brewer says honestly. “But at the last two shows of that tour, in Chicago and Detroit, we had huge crowds. So in ’97 we decided to put Grand Funk out there as a headliner. We did about thirty shows in the U.S. and four in Japan.”

In ’98 the band decided to “go out and really crank it,” according to Brewer, performing about seventy-five shows—but not before organizing several very special concerts in ’97. Brewer explains: “In ’96 we talked about something the band wanted to do twenty years earlier, which was to play live onstage with an orchestra. Our manager, David Fishof, knew the United Nations Ambassador from Bosnia, Muhamed Sacirbey, who’d been after him to put together a rock ’n’ roll show to bring awareness to the ethnic cleansing in Bosnia.” The band loved the idea—especially if they could incorporate the orchestra. 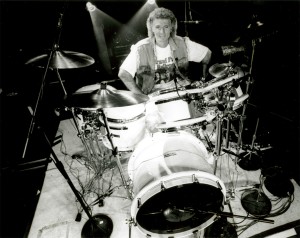 The concept proved so popular that Grand Funk ended up doing shows in Detroit, New York, and LA, featuring guest artists Peter Frampton, Slash, Leslie West, Billy Preston, and Alto Reed from Bob Seger’s Silver Bullet Band. The performances raised around $30,000, which contributed to the building of a wing on a children’s hospital in Sarejevo. Proceeds from the resulting album, Bosnia, continue to go to charity.

It makes sense that Grand Funk would make their comeback with a live document. They always had a special rapport with audiences—even if some critics refused to acknowledge it. “Audiences loved us,” Brewer recalls, “but the critics just slammed us. We’d read reviews the day after a show and go, ‘This guy couldn’t have been at the same show we were at.’ It also didn’t help that our old manager, Terry Knight, tried to create this image that he was our mentor and we were these puppets who did whatever he wanted us to. He tried to keep us away from he critics, and they felt snubbed.”

The crowds didn’t seem to care about critics, though, and the band twice documented their boundless live energy—as well as their audiences’. “We wanted crowd involvement,” Don explains. “Early on, we looked at music as more of a performance vehicle. Back then we played shows with tons of bands, and we’d be competing with them. We saw how these other guys would draw a response from the crowd, and we started doing whatever it took to do the same thing.

“I always felt that musicians are there to entertain,” Don elaborates. “To do that, I try to create an energy and push things to the limits. The ’70s was a wonderful time because you could do that and the audience was always there with you. Even in the studio, if it felt good, it didn’t matter if it went from 80 to 100 bpm over the course of the song. Even fills that weren’t perfect were effective, as long as they had a reason to be there.”

Live, there was even more freedom to create. “For years, every night I’d take a different approach to my solos,” Don says. “I’d open with something specific, then take off in different directions. I guess I’m known for this triplet thing between the right and left hands and the right foot, which I borrowed from the guys who played double bass. I was a single bass player, so I tried to create the same effect.”

Brewer was also known for being a showman. “I’d try to arouse the crowd,” he recalls, “get them involved in what I was doing. I stole this thing from watching pro wrestling on Saturday morning. These guys would hit their head on something, and blood would fly. I’d make believe that I was hitting my head on my snare drum. My hair would flop down and hit the drum and I’d hit the bass drum at the same time, which gave the effect that I was cracking my head against the drum. The audience loved it—though I never intended for anybody to think it was real!”

Today you probably won’t see Don trying any wrestling moves, though listening to Bosnia, it’s obvious the man who played drums and sang lead on “We’re An American Band” hasn’t lost any of his balls-to-the-wall rock attitude. But there’s no denying, the years have passed, and Brewer is well aware that continued success is never guaranteed. “We’re still trying to figure out what to do next,” he says frankly. “We have three new songs that are on the anthology, and we’re always talking about getting back together and doing a whole album at some point. We’ve got a lot of dreams and wishes. But we’re not kids anymore, so after being out there all of last year, this year we’re laying back and taking some time off.”

You can bet Brewer isn’t going to rest too long, though. “Most people only get a chance to go through this once—if they’re lucky. To have a second chance and be out there in front of audiences who really want to hear us again—that’s just amazing. It gives me chills thinking about it.”