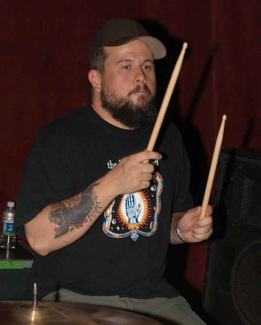 Clutch has been somewhat of an under-the-radar band since its formation in 1990, but to those who are aware of the Maryland-based rockers, there are few who can match their eclectic sound and locked-in groove. Jean-Paul Gaster’s gritty playing and deep pocket have fueled the band’s music through an ongoing evolution from the post-hardcore metal/rock of their early releases to the funkier, blues-based jams of more recent years.

Gaster was initially drawn to drumming through the underground hardcore music associated with the skateboarding culture of his youth, but he has found inspiration from wide-ranging sources. Among these are Elvin Jones, Zigaboo Modeliste, John Bonham, and Washington D.C. go-go music—a local subgenre of funk that started in the late ’70s.

Clutch has released a steady stream of EPs, live CDs, studio albums, and DVDs and has been a steady presence on the road. Despite Clutch’s busy schedule, Gaster has found the time to lend his skills to projects by Five Horse Johnson and Scott “Wino” Weinrich as well as collaborate with Opeth keyboardist Per Wiberg and Kamchatka guitarist Thomas Andersson on the side-project King Hobo. The four Clutch members also share an instrumental alter-ego known as the Bakerton Group, which explores a more jazz-tinged style of music.

For more on Jean-Paul Gaster check out this classic post from Modern Drummer: https://www.moderndrummer.com/2010/11/jean-paul-gaster/