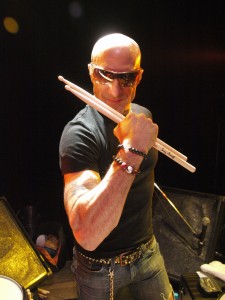 Hi, everyone at Modern Drummer! I’ve been so lame at getting a blog or news out, but here’s a quick update of what I’ve been up to in 2011.

A few weeks ago I went to San Francisco and jammed with Chickenfoot and made a video for the first single of their new album, “Big Foot.” Chad Smith will be on tour with the Red Hot Chili Peppers and therefore won’t be able to do the upcoming promo tour, so he handed over his sticks and drum chair to me.

Live, I’ve been out with John Fogerty in the U.S., Canada, South America, Norway, and Russia and with the Bombastic Meatbats in Los Angeles. I have upcoming shows across the U.S. with Chickenfoot starting in November. And I’m always doing drum clinics; recent ones include L.A. Music Academy in Pasadena on September 7 and West L.A. Music in Santa Monica (playing the Yamaha DTX electronic drumkit) on September 8.

Well, that’s it for now!

For more on Kenny Aronoff, go to www.kennyaronoff.com. And be sure to check out www.chickenfoot.us and www.youtube.com/watch?v=9nvbTAxPlxM.