Experimental rockers Battles released their sophomore full-length, Gloss Drop, this past June. Their powerhouse drummer, who caught many drummers’ attention with the band Helmet in the ’90s, gives us a look behind the scenes of this unique band.

MD: What is the motivation behind Battles?

John: It was really anything goes when we started out. There was no rush to find a sound and get in a studio or have any sort of master plan. It was somewhere in between a band and an art project, and we’ve kind of felt it out until we gradually became a “band,” releasing albums and touring.

It took a long time getting off the ground, but I think it’s really paid off. Now we’re on our second record and trying not to repeat ourselves. It is still anything-goes—within a certain parameter. It’s not like I’m going to go, ‘I think I’ll play tuba on this song.’ [laughs] But there’s this unspoken bubble between band-mates where we can push and pull boundaries and support or counteract each other.

MD: What’s your approach behind the kit for such experimental music?

John: It’d be easy to say, “Those guys are super crazy and I just play big beats to anchor them.” But it’s not that simple, and it goes both ways: They can get really out there and I’ll anchor them, or if I go too crazy, they anchor me. 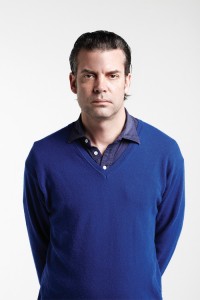 John: It usually starts with a seed—a tiny riff, drum beat, or loop—and everyone takes that and does their own thing. And someone could add a part and then everyone feeds off that, or there can be a Q&A-type situation. Writing’s easy, arranging is hard. Everyone piles on and then we have to trim what doesn’t work.

MD: How has your drumming evolved between Helmet and Battles?

John: I started out wanting to get super basic and stripped down with Battles. It was in reaction to the multi-instrumentality and complexity of the other guys—playing bass, guitar, keys, and setting off like fifteen loops each—but also to what I had done before and what drummers of the time were doing. I got rid of one of my toms and all of my cymbals except the hats and one crash.

It’s funny. I’m not even really the drummer in Battles. The master loop is the drummer. Just about every song is based around one loop, and the Ampeg monitor blasting it out behind me is really the brains behind Battles live. I play off that and then people listen to me.

MD: What’s with the super-high crash?

John: I didn’t want any cymbals but the hi-hats at first. Then I was like, “Okay, I’ll use one,” but I didn’t want it near me because I’d use it too much. So I set it high so I’d have to work to get to it. I wanted it to be significant; I use it as a marker. It’s like a master reset button when I go to the cymbal. Plus, it looks cool.