If drums could talk, mine would say, “Why are you hitting us so hard? Do you think you could take it easy tonight”? My response? “Sorry, boys, we gotta put on a show, we have a job to do, let’s get on with it!” 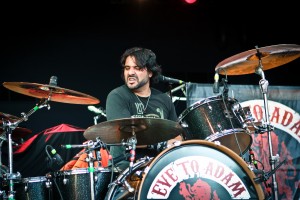 What’s up, MD readers, I’m Alex Sassaris, drummer of NYC rock band Eve to Adam. Since starting this band eleven years ago with my brother, singer Taki Sassaris, and guitar player Gaurav Bali, we’ve been spreading our unique blend of guitar-heavy, groove-oriented, melodic rock ’n’ roll. After my brother and I saw the mind-blowing Guns N’ Roses “Welcome To The Jungle” video, we decided there was nothing else in the world that would make us happier than playing rock ’n’ roll. I had a few years of informal drumming lessons and practiced on my cheap beginner’s drumset mainly in the sweltering attic after school. I pounded away for hours. I was infatuated with the bands of the day—GN’R, Mötley Crüe, Skid Row, and Aerosmith. I was particularly taken by Tommy Lee’s thunderous grooves and insane showmanship.

Later, I transitioned into the amazing acts of the ’90s, including STP, Pearl Jam, Soundgarden, Nirvana, Alice in Chains, and Red Hot Chili Peppers. The bands’ drummers heavily influenced my development, especially Chad Smith and Dave Grohl. Going back to classics, I studied the undeniable, earth-shattering performances of John Bonham, Phil Rudd, Alex Van Halen, and Bill Ward. I would like to think that I have taken a little piece of all my classic influences with their contemporary counterparts and created an intense, hard hitting, heavy pocket style of my own.

Taki and I started our band in South Florida after high school. Fate crossed our paths with songwriter/producer Desmond Child, who penned some of the biggest hits of all time for Bon Jovi, Kiss, Aerosmith, and Alice Cooper. With Desmond we learned the importance of writing parts for the greater good of the song, and not just for our egos as young players. I also had the unbelievable opportunity to watch Kenny Aronoff record drum tracks. He advised me to practice to a metronome and develop a sense of time that becomes natural but maintains the pocket, and keeps the groove of the tune. We were fortunate to have had this experience and to witness the greats up close.

We moved to New York to find the inspiration required to write impactful songs that connect with everyday life. After a few months in Queens, we found New Jersey–based guitar player Gaurav Bali. We wrote music and toured non-stop, opening the Levi’s first stage on the Mötley Crüe and Scorpions tour, along with countless other dates. The relentless hard work of our current managers’ George Zoitas and Ian Joskowitz of 3for5 Entertainment put us in a sweet position. Our single “Run Your Mouth” is climbing the charts at mainstream rock and will be included in video game Supremacy MMA, and our CD Banquet For A Starving Dog dropped on September 13. So if you have a rock ’n’ roll dream, work hard, practice, and believe in yourself—amazing things can happen!

Photo by Rob Fenn. For more on Alex Sassaris of Eve to Adam, go to www.evetoadam.com.