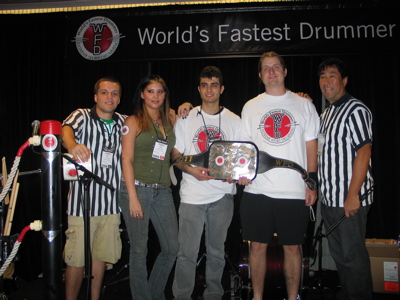 The Worlds Fastest Drummer competition celebrated its tenth anniversary as a featured attraction at NAMM Summer Session 2011 in Nashville, Tennessee. The contest consisted of two categories, Battle of the Hands™ and Battle of the Feet™. The Preliminary Heats were held July 21th and 22th. Included in the event were technical demonstrations, insight sessions, and appearances by WFD Champions and World Record Holders Matt Smith and Eric Okamoto.

The Battle of the Hands winner was 24 year old Joseph ‘Thunder From Down Under’ Moujalli of Sydney, Australia, with 995 single strokes in 60 seconds. Rick Alegria of San Jose, California, placed second (870), while Dale Bartholomew of Nashville, Tennessee, placed third (812). The Battle of the Feet winner was Kevin Bernardy of Oklahoma with a score of 860 single strokes, followed by a tie between Leonardo Baroncini (845), and Isaac Harris (845), third place went to Stephen Sparks (791).

Dan Laskowski, who traveled with his wife Bridgette from Canada and placed fourth for fastest feet (787) added, “Since I began my journey competing at WFD 9 years ago, I have learned that nothing is impossible!!” 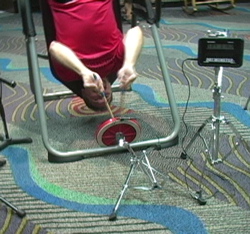 Three new WFD World Records were set including the first ever WFD ‘upside down’ endurance record. Clifford Marshall Van Buren played 6300 single strokes on the Drumometer while hanging upside down for ten minutes. WFD Champ Eric Okamoto set two WFD records of 1744 in closed doubles and 1155 to 1279 in paradiddles breaking his previous records of 1620 closed double and 1159 in paradiddles.

“This year’s Finals were totally wall to wall excitement! We had contestants from around the world including Taiwan, Australia, the Bahamas, and Canada. It was the type of event I envisioned some 35 years ago, especially seeing young WFD Champs like Joey Moujalli starting their own charities such as Drum Against Cancer, Beating Cancer with a Beat!,” said Boo McAfee, creator of WFD.