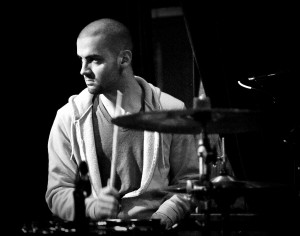 What up, MD readers! My name is Ryan Peel, and I’m a drummer/singer-songwriter from Memphis, Tennessee. I just released my debut single, “Even If,” and I’m getting ready to release my follow-up EP in September.

I’m a second-generation drummer and have been playing as long as I can remember, but I didn’t get my first kit until I was ten. My dad has always stressed the importance of tempo and feel, and he passed down an appreciation for the sound of drums over what a drummer is playing. From there, I developed my skills by playing along to CDs and instructional videos and in bands throughout my teens. In high school I began singing and writing songs, and before long I was recording demos in GarageBand. During college my music got in the hands of producer Scott Bomar (Electraphonic), and we hit it off immediately, since both of us are fans of classic Memphis soul music. Because of our shared interest, we decided to record my modern pop songs with a distinctly old-school aesthetic in mind.

For the “Even If” sessions, I knew that I wanted to emulate the sound of Al Jackson, particularly his work with Al Green and Hi Records. To achieve this sound, I used a pair of 15″ Zildjian K hats and either a Rogers or Ludwig Acrolite snare. To get that signature low thud, I tuned the batter head just above wrinkling and used a wallet to muffle the overtones. For bass drums I’ve always been a fan of a round, Questlove-esque sound, so I used a 26″ no-name with Ludwig hardware and a pillow inside. The end result has a grimy, vintage tone combined with a modern low end.

On my forthcoming EP I took everything I learned from my first record and tried to expand upon it. Some songs are influenced by Steve Jordan and Carlton Barrett, while another sounds closer to Paramore. This time around, I was the producer and engineer, so I brought a Pro Tools Digi 003 and my own microphones: 57s on snares and toms, Beta 52 and Subkick on the bass drum, and Groove Tubes or Neumann TLM 102s as overheads. Before recording, I became a Yamaha Rock Tour Rebel and subsequently bought a black-sparkle Absolute Birch kit with wood hoops. Toms are 8×12 and 13×14, and the kick is 16×24. Snares used were a 6×12 Musashi Oak, a 6×14 Rock Tour, and a 5×14 Rogers. Cymbals were a pair of mismatched 16″ Sabian crashes as hi-hats, a 17″ K crash, and a 20″ K Constantinople ride.

After hearing the final masters of my record, I am extremely proud of the sonic quality achieved with my minimal setup, and I’m anxious to get some feedback from fellow musicians. It just goes to show that proper tuning and microphone placement can go a long way in determining the final outcome of your desired sound and, ultimately, your identity.

For more on Ryan Peel, go to www.RyanPeelMusic.com.