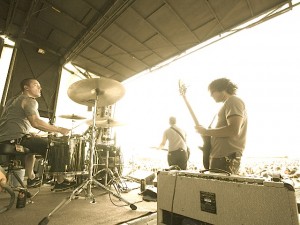 Greetings, Modern Drummer readers, my name is Riley Breckenridge and I play drums and write music for the band Thrice. I’ve been given carte blanche by the fine folks at MD to use this blog entry to write about whatever I’d like, so I thought it might be a good idea to break the mold a bit and not really talk about drumming.

Greetings, people that didn’t close their browser window after reading that last sentence. I’m still Riley Breckenridge, and I’m thankful that you decided to stick with me. I thought I’d use this entry to stress how important learning to play other instruments has been to my development as a musician, drummer, and song contributor. And by “play,” I’m not talking being a shredder on the guitar or bass, or being a piano virtuoso; I’m talking about being good enough to express and share your ideas with the people in your band who actually play those instruments. In the thirteen years that Thrice has been a band, it’s been incredibly satisfying to know I can contribute to my band’s sound beyond what I can do behind a drumkit. I don’t consider myself all that great of a drummer, but what I lack in skill and technique behind the kit, I think I’ve made up for by writing guitar riffs, piano parts, and electronic programming that have become some great Thrice songs.

I am lucky to be in a situation with Thrice where the writing of music is such a collaborative process. I realize that not every band functions like that—this is for those of you who are looking to start a band, or are currently in a band where the songwriting process is a healthy exchange of ideas. I can’t encourage you enough to pick up a guitar, sit behind a piano, and open a Reason file between your drum lessons, shed time, or band practice. Experiment, explore, and learn. Striving to become a more well-rounded musician will not only bring you great satisfaction beyond your drumming, it’ll make you a better listener and help you understand your role as a drummer better. It’ll help you learn to serve the song, to lock into a bass groove, and to play off a guitar or piano riff. Most of all, during writing sessions it’ll help you convey those melodic ideas that pop into your head and that you’re just burning to share. You’ll be able to present your idea to the band via the instrument it’s intended to be played on, rather than frustrating the hell out of your bandmates by scatting an indiscernible melody. Trust me, it’s worth it.

You can hear my latest contributions on Thrice’s new record, Major/Minor, which is coming out September 20 on Vagrant Records. If you’d like to see us live, we’re touring the US this fall, and for more of my writing, head to www.hermitology.com.

For more on Riley Breckenridge and Thrice, go to www.thrice.net.