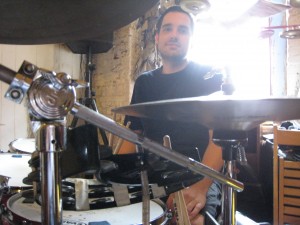 Hello, modern drummers! My name is Matt Miller, and I am twenty-four years old. I’ve been a longtime MD reader and I’m honored to be able to contribute a few words!

I started playing percussion in fourth grade and then drumset in seventh grade. The bulk of my education comes from my high school’s extracurricular activities like marching band, concert band, jazz band, and pit orchestra. I had the opportunity to be in the New Jersey All State Band several times, and I had the pleasure of being a member of the 2007 Penn State indoor drum line. My personal drumming style draws from all of these experiences equally. My parts can reflect both the loose approach of orchestral percussion and the more rigid tendencies of traditional marching percussion, though extreme dynamics and subtlety are my favorite weapons in my drumming arsenal.

I’ve had the honor of playing music with Joseph D’Agostino of Cymbals Eat Guitars for over six years now. As CEG, we released our debut album, Why There Are Mountains, in 2009. We’ve toured the United States and Europe for the past two years and have had the pleasure of playing with numerous other great bands that we all look up to. I’ve had the opportunity to see several of my idols play drums live, including Glenn Kotche of Wilco, Joe Easley of the Dismemberment Plan, and Matt Barrick of the Walkmen. I’ve also begun idolizing a few new drummers, like Joe Stickney of Bear in Heaven and Kliph Scurlock of the Flaming Lips.

Seeing so many other great drummers over the past couple of years has made me more motivated now than I’ve been at any other time in my life. Stylistically they are all very different drummers, but what they all have in common is that they add so much texture to their respective music. The consistency of playing live shows almost thirty nights in a row during any given tour has given me the chance to home in on my trouble areas and learn from my mistakes. Even when the monotony of the road and living out of a van are getting me down, it’s hard not to be inspired when I get to meet so many other people who love doing the same things that I do.

After touring for the past two years, we recently settled down and began writing our sophomore album together in our bass player’s basement. The final product of that time is Lenses Alien. It’s an album that is still very much Cymbals Eat Guitars, but has a cohesiveness and a streamlined feel that we could only attain by constantly playing together over these past two years.

This album is more of a collaborative effort between all four band members than we have ever had in the past. The ten tracks on the CD flow together from beginning to end. This record gave me the chance to try new things that I have learned from other drummers or on my own during practice.

The parts I play on this album are more streamlined and consistent. Above all else, they are the parts that the songs need, not just what I want to play. The drums accentuate the music and the melodies rather than cover them up or create an obstacle for them to overcome. When it comes to drumming in a band, simple and consistent does not necessarily mean boring. Sometimes the basics are the best, period. I tried to take a more minimalist approach on record so that I will have the opportunity to try new things and improve upon my parts during our live show. That keeps playing the same set night after night fresh for both the band and the audience. Lenses Alien will be released this August 30 on Barsuk Records. We will begin our national tour in September and will be coming to a city near you. Be sure to check us out, and when you make it to a show, be sure to pull me aside afterwards and we’ll talk drums!

For more on Matt Miller and Cymbals Eat Guitars, go to www.cymbalseatguitars.com.