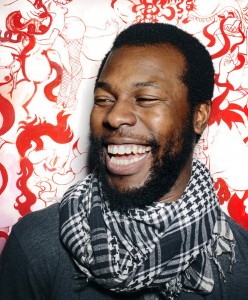 Hey, all, it is a pleasure and honor to be writing a blog for Modern Drummer.

I grew up in the church tradition, playing gospel. Around age eleven I got really into break-dancing and I kind of got away from the drums for a few years. But when I was fifteen I joined a band called Single Effect Theory. We did a bunch of national touring, signed to a major label in 2006, and broke up while recording our first record. Shortly thereafter I decided to go to the New School University for Jazz and Contemporary Music, where I had a very short-lived and unpleasant experience. Since then I’ve worked with some pretty awesome people, including Kyle Patrick from the Click 5, Jesse Reuben, Matt White, Chris Velan, Reed Waddle, Sam Barsh, Casey Shea, Vanessa Bley, Teddy Kumpel, and producer Lestyn Polson (David Gray).

Some of my influences are Steve Jordan, Riley Breckenridge from Thrice, Jim Black, and John Theodore. Besides playing for a number of artists, I am also a member of a band called Aabaraki, who, in my opinion, blurs the boundaries between soul, indie rock, and funk. We released our self-titled record in June, and it’s been gaining some buzz. It’s nice to be a part of a project that’s my own, creating new things as opposed to interpreting them.

Advice for other drummers: Practice as much as you can. Use a metronome but don’t be a slave to it. Play other instruments because it helps with understanding the relation between them and the drums. And befriend other drummers because you can learn from anyone.