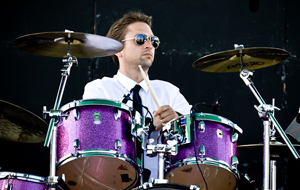 What up, fellow Modern Drummers! I first want to thank MD for the opportunity to write this. I have been a long-time fan of the mag, and this is truly an honor for me. My name is Louis Raphael and I am the drummer for Stiletto Ghetto. We’re a high-energy rock/funk/blues/soul band from San Francisco who have just released an EP titled Tendernob Hillbillies on Steve Vai’s Digital Nations label. The whole deal came about after the band was handpicked to open up for L.A. Guns in a Guitar Center–sponsored competition a few months back, which was a dream come true for me since they were one of my favorite bands growing up.

My humble beginnings as a drummer began in the garage of my old house in Berkeley. I had studied music since being a tiny tot in France, and although my parents encouraged me to play more conservative instruments like the flute and clarinet, they simply weren’t loud or aggressive enough for my tastes. So, after enough of my pleading and arguing, my parents ended buying me my first kit as a Christmas present when I was in the eighth grade. I studied percussion privately throughout my high school days with Tommy Ricard, the drummer of Vain (another great ’80s rock band) and jammed regularly with different high school buddies, but it wasn’t until I first played with my current guitarist, Nicolas, that I felt a genuine musician’s connection.

Growing up, I can remember taking long road trips with my parents and falling in love with the rhythm of classic rock, old-school funk, and ’80s hard rock. John Bonham, Tommy Lee, and Alex Van Halen were some of my early influences, and it became apparent to me at an early age that drumming was above all based on groove and swing. Sure, you need chops, but the audience doesn’t dance to someone’s 32nd-note paradiddles. As an adult I started discovering the OMGs of drumming, like Steve Gadd, Buddy Rich, and especially Tony Williams. I’ve always been drawn to heavy-hitting, powerful drummers with unique voices and hypnotic grooves, aspects that I’d like to think can be found in my drumming as well. I owe most of what I can do today to my teacher Chuck Brown (David Garibaldi, Terry Bozzio), who’s not only an amazing master teacher but an inspiration to keep pushing myself as a drummer.

As for Stiletto Ghetto, it’s a project that’s been in the making since Nicolas and I have been teenagers. It’s been on and off for decades, mostly because we were unable to find the right players to really pull it off. Just like anything, you need the right ingredients, even if the recipe has been written down for years. Well, after all this time we’ve finally found the missing ingredients in Safiya and Marcus, and we’ve just re-released our remastered debut EP. We put our blood, sweat, and tears into this one and have been getting rave reviews for its sound, which combines classic rock with funk and soul.

For all of you fellow gear-heads out there, my current live setup for smaller gigs is a Gretsch Catalina bebop kit. People are always amazed at how loud that little kit can get in the right heads and with the right tuning and mics, but mostly it makes my life a lot easier when it comes time for lugging gear around. For bigger gigs I use a Ludwig amber Vistalite kit, similar to the classic set used by John Bonham in The Song Remains the Same, but with bigger shells and a classic four-piece jazz configuration.

That’s all for now. Keep on rocking, and I hope to see some of you at our shows!

For more on Louis Raphael and Stiletto Ghetto, go to www.stilettoghettoband.com.
Photo by Jeff Sprier.