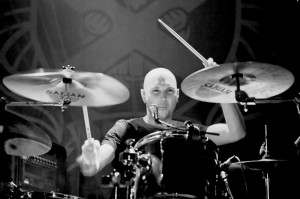 Hello, fellow drummers. Welcome to my first entry into MD’s blogosphere! This has been an interesting year for me thus far—and it’s about to get a whole lot crazier.

The year started out with its typical post-holiday gig drought. Just as I was contemplating getting a real job, I get a call to cover a tour with international pop star Robyn. They emailed me a board mix of the set and the next day I was playing with her in Philadelphia. Three days later we played a sold-out show at Radio City Music Hall. That was a fun night! The tour lasted three weeks and I had a blast.

So, after a few months of recording, teaching, and doing local gigs in NYC, I hit the road once with Moby. We’re spending three months headlining festivals throughout Europe and the Middle East promoting his record Destroyed. I’m really looking forward to having some amazing adventures.

I’ve also got a new solo record in the works, and it should be released late this fall. I’m also hoping to get a publisher for my new book, The Complete Drumming Career Course.

For more on Joe Goretti, go to www.joegoretti.com or www.moby.com.