First introduced in 1936—when it could be heard on Benny Goodman’s soon-to-become classic “Sing, Sing, Sing”—Slingerland’s Radio King snare was revolutionary in that it made double-headed, tunable toms available to drummers for the first time. 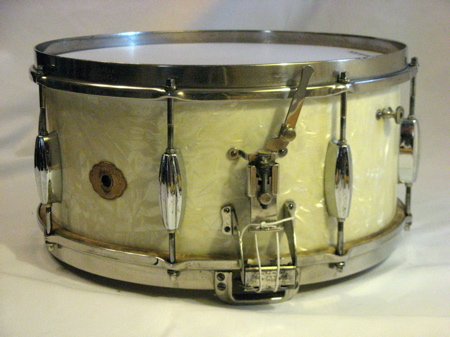 The 1936 Slingerland catalog describes the new Radio King snare drum as “The Drum That Has Everything.” At that time, all Radio King snares came equipped with eight streamlined lugs, which gave them quite a majestic appearance.

Slingerland’s most popular drum at that time was the Gene Krupa model, which was designed under Krupa’s specifications and was dedicated to him exclusively. The drum was offered in one size and one color, with chromium being the only plating option. Today, this 6½x14 white marine pearl drum is considered to be the quintessential Radio King snare and is highly collectable.

For more on the Slingerland Radio King snare, check out the July 2011 issue of Modern Drummer magazine.