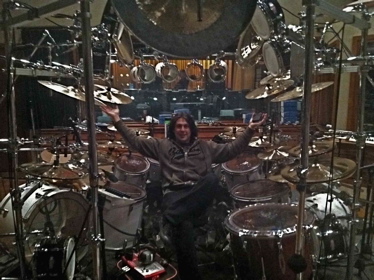 The announcement that Modern Drummer Hall of Famer Mike Portnoy had left his longstanding position as the reigning king of prog-metal drumming with Dream Theater sent shockwaves through the drumming community. Who could replace such an iconic figure in such a legendary band? Could this be the end of Dream Theater, the group that single-handedly created the prog-metal phenomenon that’s still thriving today?

The remaining members of Dream Theater chose to up the ante, and auditions were arranged for a who’s who of elite international drumming superstars. The list included Virgil Donati, Thomas Lang, Marco Minnemann, Derek Roddy, Aquiles Priester, Peter Wildoer, and Mike Mangini. As the world watched the intense auditions via the Internet, the seven world-class players competed in an attempt to win the coveted drum throne. When the smoke cleared, Mangini emerged as the band’s pick. The drummer’s amazing journey is one of personal struggle, commitment, heartbreak, dedication, frustration, and, finally, victory. Here, we speak to Mike about that journey, as just the first part of our coverage of his Dream Theater experience. There will be much more to come in the pages of Modern Drummer.

MD: You had recently suffered a severe knee injury as well.
Mike: The emotional pain was much greater than the physical pain. I’d never had a major injury in my life until then. It really hurt. Both sides of my right knee were torn up badly. It was from three decades of sports injuries, along with poor technique in my right leg. I know myself, and I know that I have always had issues with my legs retaining their speed. What I found out was that when a knee injury occurs, the knee signals the brain to shut the muscles down and fix the problem or let it rest until it’s healed. I ignored that, and the meniscus became extremely frayed.

At the same time, I was committed to teaching full time at Berklee. I love teaching but really missed being part of a band, creating something musical. I wanted to be on stage playing drums. The combination of all this was starting to weigh on me. Even though I continued to perform clinics, I was feeling that I had been left out of a lot of things in the drumming community, and I couldn’t understand why. The icing on the cake was the fact that I really had no time to reach my full potential as a player because I was honestly too tired to practice. That was an intense period of frustration.

MD: To leave L.A. and come back to Boston to teach at Berklee after touring with Steve Vai early in your career was also a difficult decision.
Mike: It’s hard to do the right things in life. I was raised with the simple philosophy of God first, family second, and career third. You can always choose a different career. But once you commit to a marriage and choose to have children, you have to sacrifice other things in your life. But this also brings incredible benefits. Putting God first means to search for the truth and try to do the right things in life. I’ve always tried to do the right things and do whatever it takes to provide financially for my family. And it’s really hard at times.

MD: Now that the auditions are over and you have been awarded the prestigious drum chair in Dream Theater, what have you done so far with the band in terms of music?
Mike: My drum tracks for the new DT release are finished. They are currently finishing up keys and vocals. The new CD is scheduled for release in the fall.

MD: Have you created a drumkit to fit the specific needs of Dream Theater?
Mike: I showed up for DT ready for DT. Meaning the drumkit’s core was designed years earlier, but I prepared a kit design with DT’s music in mind, with Mike Portnoy’s incredible drumming style in mind. My DT setup is designed for my left foot to be hitting a 26″ bass drum. I’m playing totally lefty on a big bass drum. Mike had to get up off his stool and move to another stool to hit a 26″ bass drum. He also had to get up and move to another kit to play a smaller bass drum. I have a 26″ to my left, an 18″ bass drum on my far right, and two 22″ bass drums in the center of my kit.

MD: Can you break down the overall design of your new Dream Theater touring kits?
Mike: I’ll be using either a Pearl Reference Pure kit or a Pearl Masterworks kit in this setup. The two 22″ center bass drums are identical in size in order to play typical double bass patterns and to be able to play single kick patterns with either foot. And sometimes I want to free my right foot to play my right hi-hat. The 26″ bass drum on my left is played by a slave pedal and used for big, airy, heavy rock sections. The 18″ bass drum to the right is for dynamic purposes. My four acoustic bass drums are designed to create low-end dynamics within a single drumkit. I also have two Pearl e-Pro electronic kick drum triggers on the far left and far right. This allows me to trigger percussion sounds or any other sound I choose.

So I have a choice of six kick pedals at all times. I have to credit Mike Farriss at Pearl Drums for helping me design and create this incredible setup. He’s hand-making me a set of Pearl e-Pro electronic drums to include in this kit. My other two pedals are my cable hi-hats, which are wired to crisscross the kit so that each pedal controls the hats of the opposite hand. The toms are set up in an apex shape so that I can perform patterns as a classically trained musician. When guitarist John Petrucci plays a minor scale from high to low, descending one note at a time, I can also descend one note at a time on my toms, in the exact sequence. The gong drum acts as a bridge between my hands and feet, when I need a bass drum sound but my feet are already busy on other pedals.

My Pearl signature snare in the middle of my kit acts in the same way, as a bridge up to the suspended cannon drums in the front of my kit. Or it acts as a secondary snare drum for dynamic purposes. I will play sticking patterns between my mini snare and my main snare because that allows me better dynamics that I can’t achieve on my main snare alone. In the same way, I can use my 18″ bass drum and my 26″ bass drum together in a pattern to create more extreme dynamics within a groove.

My cymbal setup is designed to complement the specific dynamic frequency in the same way. I’ll use a smaller cymbal for high notes in the music and larger cymbals to accentuate the lower notes. I need quite a few of them to cover the gamut of the heavily composed music of Dream Theater. I also split my cymbal setup symmetrically, from the middle out to each side. My cannon drums are set up from left to right. Mike Portnoy used Octobans a lot in Dream Theater’s music, but I need to set my cannon drums up properly within my setup so I’m not killing myself to reach for them. I suspended them high in front of me, mainly because there was nowhere else to put them. I also have a set of Pearl e-Pro pads suspended up high for triggering timpani and percussion tuned to exact pitches. Everything has a very specific purpose in this kit.

MD: It sounds as though you prepared for this audition with no intention of failure.
Mike: These guys are extremely happy and appreciative of my dedication to my craft and my willingness to do whatever it takes to make Dream Theater the best it can be. And I am so grateful to Mike Portnoy for setting the bar so high in Dream Theater’s music. I made a point of playing Mike’s parts specifically for the audition because I wanted to put the music first, not my chops first. I love Mike Portnoy and have a deep respect for what he created with Dream Theater.

I feel that I am with true musical brothers now. And I don’t have to explain myself to anybody from now on.