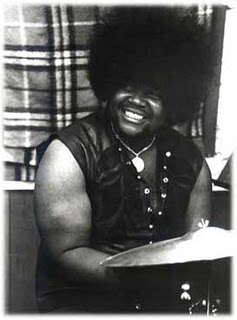 George “Buddy” Miles—nicknamed after “the world’s greatest drummer,” Buddy Rich—was born in 1947 in Omaha, Nebraska, and got an early musical education listening to the jazz that was played at home. At the same time, Buddy was listening to the R&B sounds of drummer Al Jackson Jr., who was the house drummer at Stax Records in Memphis, and to Bernard Purdie, who played with Aretha Franklin.

Miles dropped out of high school to go on the road with established R&B acts the Ink Spots, Ruby & the Romantics, and the Delfonics. While playing with the Delfonics in Montreal in 1964, Buddy met Jimi Hendrix while the guitarist was touring with the Isley Brothers. The two jammed and traded phone numbers, but soon after Jimi left for England and formed the Jimi Hendrix Experience.

In 1967 Miles joined guitarist Michael Bloomfield in the influential band the Electric Flag, with whom he played drums, sang lead, and recorded the albums A Long Time Comin’ and An American Music Band. The band was short-lived, though, and Buddy soon founded the Buddy Miles Express, whose first two albums, Expressway To Your Skull and Electric Church, were co-produced by Hendrix. Soon after, Buddy played on Miles Davis guitarist John McLaughlin’s Devotion album and on the Jimi Hendrix Experience’s third album, Electric Ladyland, taking over for Mitch Mitchell on “Rainy Day, Dream Away”/“Still Raining, Still Dreaming.”

Following Electric Ladyland, Hendrix decided to change personnel. “I think Jimi wanted a more simplified version of drums after a while,” Miles recalled later. “And I think that’s the reason he wanted me to be the drummer in Band Of Gypsys.” The music on Band Of Gypsys’ lone album—essentially a distillation of the group’s two 1969/70 New Year’s Eve sets—is widely considered to be the highlight of Miles’ career. Featuring powerful groove-oriented tunes, like the Miles-written and -sung “Them Changes,” offset by slower, longer workouts, such as the famous anti-war song “Machine Gun,” Band Of Gypsys represents Jimi’s exploration of a more soulful direction. Unfortunately, the guitarist’s untimely death in 1970 put an end to this promising phase of Buddy’s career.

In 1972 Miles co-headlined the album Carlos Santana & Buddy Miles: Live! Between 1976 and 1978, however, and again from 1982 to 1985, Buddy ran into some bumps in the road, spending time in the San Quentin and Chico, California, correctional facilities for drug-related thefts. While in jail he taught music and percussion and led and toured with the prison band. Back on the outside, in 1988 the drummer formed a new Buddy Miles band and recorded Back On The Tracks.

While playing again with Santana in the ’90s, Miles got the call to sing lead on a series of TV commercials featuring animated characters called the California Raisins. The spots were wildly popular, and Buddy—now nicknamed Buddy Raisin—subsequently recorded two albums of classic R&B and Motown songs.

Buddy Miles passed away on February 26, 2008, of congestive heart disease.