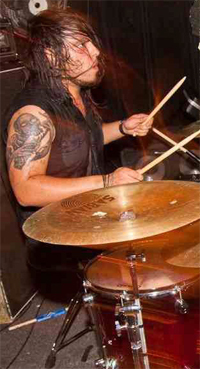 Greetings, fellow Modern Drummer readers! I’m Frank Godla of the bands Meek is Murder and Empyreon. I’ve been a fan of Modern Drummer magazine since I was a kid, so I’m really stoked to have this opportunity to discuss my drumming with you today.

I really owe it to my dad for the drumming I do today. He always wanted to be a drummer but, never having the chance while he was younger, pushed me into the trade at an early age. I was very hesitant about picking up the instrument at first, but after reading half a dozen books, doing endless rudiment practice sessions, and taking many lessons with NYC rock drummer Sam Malament, it eventually clicked in my head as something I found rather fun, especially when I became solid enough to play along to some of my favorite records at the time. I later went to a great high school that offered a music major. This allowed me to get comfortable playing along with a thirty-piece orchestra, a guitar ensemble, and a five-piece jazz band, in many cases sight-reading. I’ve always felt that broadening your playing styles and playing in multiple genres are crucial components of who you are as a musician. This may explain why I’ve always been drawn to playing with multiple bands in various genres, and can stay stoked about jumping behind the kit every day.

It’s hard to explain or classify the drumming style on the new Meek is Murder record, Algorithms. We’re often referred to as “spastic and fast,” but I think that only conveys a fraction of what’s going on with the music. It’s a record that really runs the gamut in every sense I can imagine. Blast beats, waltz beats, punk beats, sludge, grind—you name it, and you’ll find it on this record. Honestly the hardest part of recording the LP wasn’t the odd time signatures, the fast tempos, the non-existent click track, or even the playing itself, but the fact that the songs normally contain nine or more sections that don’t repeat in under a minute. It’s a lot to remember and scrutinize within seconds at a time, but it’s also what keeps things really interesting and fun to play.

We recorded Algorithms this past January with producer Kurt Ballou at God City Studios. The man knows his stuff like no one else I’ve ever seen. Until that point, every recording I’d been on since the late ’90s was done pretty much the same way: click map for each song, standard mic setup, punch-ins wherever needed, and room left for post work like sound replacement. With Kurt, he is always looking for that raw edge in a player, and has his own method to his madness. He spent nearly half of the first day testing individual mics and pre-amps for the exact sound he was looking for, the logic being that you don’t want to edit and hide what a player is doing if the idea is to create a raw/live atmosphere in the first place. He really put an emphasis on getting the tones, placement, and perfect mic set up for each drum before ever hitting the record button. Unfortunately, it does add a bit of pressure knowing there is little room for mistakes to go unheard, but in retrospect it not only locked those drum parts into my head forever, it also made me a better drummer because of it.

For more on Frank Godla and Meek is Murder go to www.myspace.com/meekismurder. And to see clips of the band tracking their latest album, go to www.youtube.com/watch?v=jS8kuNDggS0.