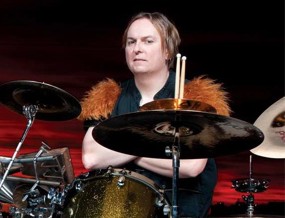 In Modern Drummer’s May 2011 cover story on the Melvins’ Dale Crover, out now, we get into serious detail. We speak with Crover about the first time he saw the Melvins, way back before he joined the band in 1984. We discuss the group’s current lineup, which also includes Coady Willis (Big Business) on drums, and its latest slugger of an album, 2010’s The Bride Screamed Murder. We talk with Willis as well, plus Melvins founder, guitarist, and main singer and songwriter Buzz Osborne. And, of course, we outline Dale and Coady’s two-headed drumset monster.

The bulk of our conversations with Crover took place shortly before the Melvins headed off on a short winter tour of New Zealand, Australia, and Japan. This was the one instance when Dale’s otherwise impeccable timing was off—the Melvins were in Christchurch, New Zealand, for the 6.3-magnitude earthquake on February 22, and they were in Japan for the 9.0-magnitude earthquake and tsunami on March 11.

The band was gearing up for the last show of the tour when the Japan quake struck. “We’d just finished soundcheck in Tokyo,” Crover recalls, “and the stage started shaking. I knew it was on hydraulics and I thought maybe they were messing with it, but after a couple seconds I looked at one of the sound techs and he’s like, ‘Earthquake!’ It was getting violent, and I could tell it was super-big.” The band members scrambled around the building to find an exit, at first with no success. Eventually they ran back off the stage and through the front of the house to get out of the venue. “That whole time it was still shaking,” Dale says. “There were big PAR can [lights] on the stage swaying back and forth—we didn’t want one of those to fall on our heads.” In the chaos Crover (who was also in San Francisco for that city’s major 1989 quake) dislocated his left pinkie; he’s not sure exactly how. Despite the intense tremors, Tokyo was spared the major damage that has devastated the north of Japan.

MD was relieved to find that the band members made it home to L.A. safely, and our hearts go out to everyone who’s been affected by these natural disasters.

Now, back to drumming…

MD: Let’s start from the beginning and talk about your drumming background.

Dale: I learned how to play drums from listening to Kiss Alive! and playing along with that record. I think it sounds great still. I was playing drums in the junior high band and taking some private lessons from the local music store.

There was a professor at the local junior college, Grays Harbor College, who was a jazz drummer, and he offered lessons on Saturdays to all of the drummers in my junior high, for fifty cents each. There were quite a few drummers between seventh, eighth, and ninth grade. I just assumed they’d all show up, because it was a great deal. But the only people who showed up were me and this other kid. The teacher was like, “Hmm…I thought I’d get more people than this, but let’s do the lesson.”

He started from ground zero, how to hold your sticks. I thought it was great and I went the next weekend, and only I showed up. [laughs] So the teacher’s like, “Well, on paper this looked good because I figured I’d probably get like ten bucks out of it. I can’t really do lessons for fifty cents for you…but if you want to do private lessons, we could do that.” I’m like, “Sure!” So I talked my mom into doing that. Ten dollars an hour with Bob Neisinger. He taught me rudiments.

MD: Were you using written notation in your lessons at that point?

Dale: Yes. Bob knew I wanted to play rock. I think the book he was teaching me out of was Haskell W. Harr Drum Method, which was basically all the rudiments that NARD uses, in different forms, and in the back of the book they had a bunch of different cadences. There was one called “Three Camps.” I remember doing a little bit of competition stuff. Anyway, he knew I wanted to play rock, and he got me a Carmine Appice book. I took lessons from him for about three years, until I started playing in a band and didn’t have time anymore to take lessons. I guess I’d had enough.

MD: Do you warm up now before shows?

MD: You play big drums live. Do you use the same kit in the studio as on stage?

Dale: I have lately. My kit now is kind of a combination of what my live kit used to be and what my recording kit is. I bought an old 1948 Gretsch kit—24″, 13″, 16″—around the mid-’90s. I used that kit for recording quite a bit. I always use the big kit live, but it seemed the smaller kit just sounded better recorded. I mean, from listening to a record you can’t tell if it’s a big kit or a small kit.

Live I used to have a 26″ bass drum, a 16″ rack, a 20″ floor tom, and a 20″ gong bass drum. That kit I had for a long time, and it was great. It was an Artstar Custom, and it was the loudest kit I ever had. I didn’t see any reason why I would ever have to get a new drumkit…until Coady was in the band and we went to Tama one day and they showed us their new Starclassic Bubingas. We tried them out, and we just looked at each other, like, “Hmm…I think we need matching drumkits.” [laughs]

Dale: Oh yeah. That’s why I had the big sticks too—I don’t use as big a stick now as I used probably about fifteen years ago. And I went through a lot more heads because it was a big drum. Now that I have smaller drums I don’t seem to go through as many heads as I used to. I don’t think it’s that I’m getting old and can’t play the way I used to. [laughs] The drums are smaller!

MD: In terms of the studio, do you record digitally?

Dale: Most recording studios that you walk into nowadays, they’ll have a tape machine, but it’ll just be a giant drink coaster sitting over in the corner. The last three albums have been digital, and especially with the two drums, there’s stuff we did that would have been way harder if not impossible to do with tape. [Bride Screamed Murder opener] “The Water Glass” has a crazy amount of drums—I can’t remember how many tracks, but over fifty, for sure. That’s room mics and stuff like that, and we also doubled a bunch of things to get the marching-band effect.

MD: Was that song pretty much done when Buzz brought it to you?

Dale: He had the idea. With the chanting, the military thing, that was kind of a combination of a bunch of different Marine Corps chants. He put together the ones that he thought sounded the best. The other stuff we kind of built around it. Originally it was a little bit different, and we did some editing. And then Coady and I came up with the drum pattern. I wrote some things and he wrote some things, and then it was just kind of sitting down and figuring out exactly what to do.

Originally we were going to somehow incorporate our high school drum cadences. There was one that Buzz remembered from his school, and I was in marching band, so I remembered mine. But we just came up with our own thing.

MD: Is there a spirit in the Melvins of trying to make each other laugh?

Dale: There’s lots of laughing. Of course. Especially touring, that’s kind of what keeps us sane. There are a lot of stupid inside jokes that nobody would get but us. Stuff that we’ve been cackling at for years where people would probably just think we’re a bunch of stupid kids. Which we are, you know? Forever in eighth grade!

I mean, hey, our name is the Melvins, first off. We’ve always admired bands that had a sense of humor. Like the Who…especially the Who. If you ever watch The Kids Are Alright, they’re constantly joking and laughing. I always thought that was important, and it’s definitely an important part of our band. Not taking yourselves completely seriously all the time, even though we are serious about what we do. The Beatles had that too. I was just watching the Anthology videos. Even on stage, you could tell they laughed at a lot of stupid inside jokes where only they knew what they meant.

MD: It’s one of the great things about being in a band, even beyond the music. Just the camaraderie and laughter.

Dale: Yeah. Fortunately that’s always been there for us. It keeps us sane. Touring is not the easiest thing in the world. You’re away from home, you’re sleeping in a different bed every night, traveling…. We’ve been doing this long enough that we’ve seen people just freak out, and for no real reason at all. It’s just a tour psychosis people sometimes get. We’re all guilty of it happening to us too, but we can see it in other people when it’s gonna happen. “Hey, you need to just settle down, take a deep breath….” Usually the person will realize, “Yeah—why am I freaking out for no real reason”?

MD: It seems like you and Buzz have gotten touring down at this point.

Dale: Yeah, and also if you remember why you’re there in the first place. We’re out on the road to play music and make money. This is what we do for a living, and we’re fortunate enough to have a job that we like. It could be a lot worse. A job playing music—hey, that’s what I wanted to do when I was a kid. I feel fortunate.